The sponsor of a bill to legalize recreational marijuana for adults has been saying for weeks that passing it would be complex and require many, many committee stops.

AndRep. Zack Stephenson(DFL-Coon Rapids) was clear at the bill’s first committee stop Wednesday that he’s eager to begin that long journey – with the support of a majority of Minnesotans.

“Minnesotans are ready,” Stephenson said. “Cannabis should not be illegal in Minnesota. Minnesotans deserve the freedom and respect to make responsible decisions about cannabis themselves.”

The bill cleared the first of what may be up to a dozen committee hurdles when the House Commerce Finance and Policy Committee approvedHF100,as amended, by a voice vote Wednesday and sent it to the House Judiciary Finance and Civil Law Committee.

Cannabis possession and use

Medical marijuana became legal in Minnesota in 2014, and last year the Legislature legalized recreational cannabis edibles for adults provided each edible contained a maximum of 5mg of THC and only if the THC was derived from hemp.

And in the last days of the 2021 legislative session, the House passed a very similar recreational cannabis bill,HF600, but it went nowhere in the Senate.

The current version would permit a person age 21 or older to:

However, there would be several legal limits on marijuana use, and civil penalties for violating those limits.

Stephenson made it clear that a major driver for legalizing recreational marijuana is that “prohibition does not work.”

“Our current laws are doing more harm than good,” he said. “State and local governments are spending millions enforcing laws that aren’t helping anyone – money that could be put to far better purposes.”

The bill will need to make as many as a dozen committee stops, Stephenson said, because it would make significant changes in many parts of Minnesota law that include:

The subject of local control — or lack thereof — was the subject of anamendmentunsuccessfully offered byRep. Kurt Daudt(R-Crown). It would have given cities or towns options to enact local ordinances regulating cannabis business licenses that could differ from those proposed statewide.

And anamendmentfromRep. Jeff Dotseth(R-Kettle River) would require the Office of Cannabis Management to study the health effects of secondhand cannabis smoke.

Stephenson said the Dotseth amendment was a good idea, but noted his bill already would prohibit smoking cannabis in places where smoking is not allowed under the Clean Indoor Air Act.

Public input, for and against

The minimum age to purchase state-regulated cannabis would be 21, an age several testifiers said is too low. They cited research that the brain is not fully matured until about age 25 and can be greatly harmed by cannabis use.

“If this Legislature has any interest in protecting young Minnesotans, it will increase the minimum age limit to 25 and add a THC potency cap to this bill,” said Ryan Hamilton, legislative liaison of the Minnesota Catholic Conference.

Traffic speeds are up, law enforcement is understaffed, and there are no reliable roadside tests to assess cannabis impairment, he said. “How can putting more cannabis-impaired drivers on the roadway make that situation better?”

Other testifiers echoed Stephenson’s admonition that the decades-long prohibition and criminalization of cannabis has not worked to make society safer and has had a devastating effect on minorities.

RaeAnna Buchholz, legislative and coalitions director of Americans for Prosperity, said creating a legal and highly regulated retail market for cannabis would go a long way toward eliminating the illegal market that has been so harmful for users and for society in general.

But she also warned lawmakers that taxing cannabis at an excessive rate would lower the ability of legalization to eliminate illicit cannabis sales. 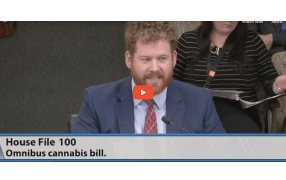