This can’t come as a surprise to anybody with a modicum of brain cells. “CannTrust, based in Vaughan, Ontario, fell from the third-most-reputable cannabis company in Canada earlier this year to 19th this summer, the new survey by Montreal-based Leger found, quantifying the reputational risk for breaching regulations.”

Mj Biz write……CannTrust has been in a tailspin since a whistleblower alerted Health Canada in July to unlicensed cultivation at the company’s greenhouse in Pelham, Ontario.

In the aftermath, the company halted all adult-use and medical sales, fired its senior leadership and is facing a probe by securities regulators and police.

The Leger survey was conducted online from July 12 to July 15 to weigh the reputations of 19 of the leading cannabis producers in Canada from the perspective of the general public and cannabis consumers. 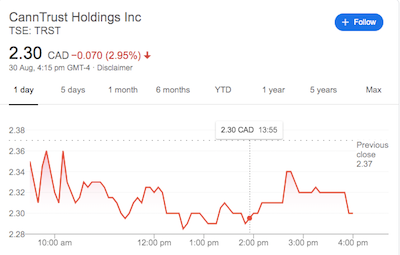