This is what MJ Biz have learnt

Under a settlement with a federal agency stemming from an employee’s death, Florida-based Trulieve Cannabis will study the potential hazards of ground marijuana dust.

The research is part of an agreement between Trulieve and the U.S. Department of Labor’s Occupational Safety and Health Administration (OSHA), which earlier this year alleged that ground cannabis dust at the company’s facility in Holyoke, Massachusetts, contributed to the January death of worker Lorna McMurrey.

According to a news release, the study will determine if ground cannabis dust should be classified as a hazardous chemical.

The research, which Trulieve said will be completed by May 29, 2023, could have widespread impacts on the marijuana industry as a whole.

The company will also create a temporary training program about potential allergic reactions to ground cannabis dust and what to do if they arise.

Trulieve has also agreed to:

Under terms of the settlement, two citations against Trulieve originally classified as “serious” were withdrawn, including the lack of a safety data sheet – which OSHA requires for hazardous chemicals – and training employees under the agency’s hazard-communication standard.

A final citation ordering Trulieve to conduct a hazard analysis replaces an original citation that identified the standard for listing hazardous chemicals.

Lorna’s own statements on her date-stamped Facebook page. Statements that show the pre-existing Trulieve excuse is likely a false narrative. McMurrey’s asthma conditions started after her work began at Trulieve. McMurrey in her own words documents a struggling worker wondering if she might die and a management that didn’t seem concerned about Lorna’s health even after a November 9th first ambulance ride and a CCC investigation had commenced.

Trulieve mentions none of that in their disingenuous press statements! It’s as if she just collapsed in January and died and they never had any indication that there was a problem with her respiratory when they clearly should have known after the first ambulance was called on November 9th. 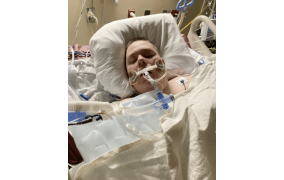