The Minnesota House voted 72-61 Thursday night to legalize cannabis for adult use — a significant step for the legislation. But Minnesota is unlikely to join more than 15 other states in making marijuana legal because majority Republicans in the state Senate will likely prevent it from becoming law this year.

Under the bill, Minnesotans 21 and older would be allowed to possess up to 2 ounces of cannabis in public and up to 10 pounds in their personal residence.

The bill creates a regulatory and tax framework for cannabis. A new Cannabis Management Board would oversee the regulation and also take charge of the state’s existing medical cannabis program. A recent change in the bill would direct excess tax revenue from adult-use cannabis into a tax relief account.

The DFL-controlled House held 12 hearings on the legalization bill; the Republican Senate held none and has no plans to take it up before the session ends Monday.

Republican Senate Majority Leader Paul Gazelka, of East Gull Lake, repeated Thursday that he is not interested in legalization and it is not going to happen. Gazelka believes legalization for recreational purposes would bring unintended negative consequences. 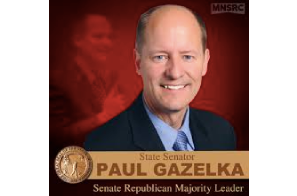