MORE Act Passes In The House

It looks like it is the beginning of the end for US Federal prohibition of cannabis.

The first domino has eventually fallen.

It took a few attempts to get MORE through the house but now at least the process has started with a 228-164 floor vote to allow cannabis businesses nationwide access to financial services with Federal protection like any other business and a range of other provisions that you can read about in the following reports.

Let’s start with NORML as they’ve been at the coalface longer than anybody else.

Moments ago, members of the House of Representatives voted to approve the Marijuana Opportunity, Reinvestment, and Expungement (MORE) Act, HR 3884, which removes marijuana from the federal Controlled Substances Act — thereby eliminating the existing conflict between state and federal marijuana laws and providing states with the authority to establish their own cannabis laws free from undue federal interference.

This is an historic day for marijuana policy in the United States. This vote marks the first time in 50 years that a chamber of Congress has ever revisited the classification of cannabis as a federally controlled and prohibited substance, and it marks the first time in 24 years — when California became the first state defy the federal government on the issue of marijuana prohibition — that Congress has sought to close the widening chasm between state and federal marijuana policies.

And this important victory is due in no small part thanks to YOU.

Together, over the past few months, we have sent thousands of emails and made hundreds of calls to members of Congress. Today, those efforts paid off.

By going on the record with this vote, House members have set the stage for a much-needed legislative showdown in 2021 when we will have the Biden administration in office — one that has publicly expressed an appetite for advancing the restorative justice remedies outlined in the MORE Act. We are primed and ready for this legislative debate and we expect, ultimately, to win it.

So today we celebrate. Tomorrow, we get back to work. NORML won’t stop fighting until there isn’t a single person in this country put in handcuffs for possession of cannabis and until all 50 states in this country embrace the sensible and pragmatic policy of legalizing and regulating marijuana. But we can achieve these goals if we remain united in our efforts. Are you in?

“The legalization efforts of Cannabis have been a great civics lesson for those interested in legalization.  This week, the House Rules Committee is voting on the MORE Act with the hope of sending it to the full floor for a vote.  The passage of the MORE Act is just the first step in actualizing what is packed up in the Act. The next step would be passage in the Senate.  At which time an understanding of policy and procedure is critical to take an Act with as many components as the MORE Act from “passage” to “reality”.  Knowledge of the criminal justice system, the schemas and urban development will all be necessary to ensure that the spirit and intent of the MORE Act are actualized.” —

Next we hear from the Cannabis Trade Federation

Just moments ago, the U.S. House of Representative made history by passing H.R. 3884, the Marijuana Opportunity Reinvestment and Expungement Act (MORE Act). One of the two chambers of Congress is now on record in support of removing cannabis from the Controlled Substances Act entirely! This vote represents the first major step toward finally dismantling cannabis prohibition at the federal level.

We want to extend our hearty and sincere congratulations to House Judiciary Committee Chairman Jerrold Nadler (D-NY), congressional cannabis champion Rep. Earl Blumenauer (D-OR), members of the Marijuana Justice Coalition, and all of the other individuals and groups who have fought for passage of this bill during the current session of Congress.

In addition to ending cannabis prohibition at the federal level, the MORE Act would establish a federal excise tax to support a broad range of programs and services, from job training and reentry services to literacy programs and substance abuse treatment services. It provides for expungements and sentence reviews for past cannabis convictions and prohibits the federal government from denying certain benefits or protections based on cannabis use. It would also ensure that cannabis companies, which have been denied Paycheck Protection Program (PPP) assistance during the pandemic, are eligible for Small Business Administration loans in the future.

Unfortunately, the MORE Act will not be taken up by the Senate during the remainder of this session of Congress. But work will begin anew in January when the new session begins. CTF will be working with its allies next year to ensure that the MORE Act – or whatever piece of legislation is the primary vehicle to end the state-federal cannabis conflict – establishes a thoughtful foundation for a federal regulatory framework for cannabis.

Sometimes in life we get caught up in the day to day battles and the ups and downs of reforming this nation’s unjust cannabis laws. Today, however, is a day to step back and appreciate how far we have come. The fight is far from over, but the progress we have made since a small group of passionate advocates in California launched Californians for Compassionate Use twenty-five years ago in order to begin the process of tearing down cannabis prohibition is incredible.

“The primary obstacle to banking in the cannabis industry is the bankers prevailing belief that it’s a disreputable business that they are unwilling to support or be associated with. Passage of the MORE Act will help more of them feel that perhaps they trend towards mainstream acceptance and therefore expand access to banking. It remains to be seen whether the major card networks (Mastercard, Visa, American Express & Discover) will permit the use of their respective networks under the MORE Act since they are on the record stating that only federal legalization will suffice. Nonetheless, with or without federal legalization or the substantial equivalent provided by the MORE Act, industry banking support is steadily growing – Fincann’s official industry-friendly bank counter now reports over 150 federally-insured banks comprising 1000s of branches throughout the US.”

For the first time in U.S. history, the House of Representatives just approved legislation that would remove marijuana from the Controlled Substances Act, making it legal at the federal level. The groundbreaking bill, H.R. 3884 — the Marijuana Opportunity Reinvestment and Expungement (MORE) Act — passed the House with a 228-164 floor vote.

The Senate is not expected to take up the bill before the end of the year but the resounding passage in the House provides momentum for NCIA’s efforts as we go into the 117th Congress. The vote also sends a strong message of congressional intent to the incoming Biden Administration.

The MORE Act — introduced in 2019 by House Judiciary Committee Chairman Jerry Nadler (D-NY) and Senator (now Vice President-Elect) Kamala Harris (D-CA) — would remove cannabis from the list of federally controlled substances, allow the expungement of marijuana convictions, and establish a federal cannabis excise tax. The bill would also address the industry’s banking concerns as well as ensure that cannabis businesses are not denied access to Small Business Administration loans.

Having been at the center of national marijuana reform efforts for nearly two decades, I really mean it when I say that we can’t underestimate the significance of today’s first-of-its-kind vote. Reaching this milestone was only possible because of the NCIA members who are invested in our advocacy efforts on Capitol Hill. Thanks to them, NCIA has been able to build congressional support for the MORE Act since its introduction last year.

“Even though the MORE Act is unlikely to go anywhere in the current Senate, this historic vote sets the tone for marijuana reform going into the Biden Administration and the next Congress. It also shows that politicians at the federal level are finally catching up with their constituents on this issue. No matter how you slice it, it’s an important milestone for marijuana reform.”

Is the number 3884 magic? It is if you are a supporter of legalizing adult use of cannabis in the United States. That is because HR 3884 is the bill the House of Representatives just passed by a party-line vote of 228-164* to federally decriminalize marijuana. It is not a big surprise that the Democrat-controlled House could muster the support to pass this bill, called the MORE Act. It is not, however, expected that the current Senate would approve it to go to the President for signing. Even so, it is still a big, big deal. Why? For several reasons, let’s go through them.

Now for the media reports

1) Marijuana Moment will give you detail you need

It’s the day that cannabis reform advocates have been building toward for years—a full floor vote to end prohibition in a chamber of Congress.

Prior to the bill’s approval in a 228 to 164 vote, Republican lawmakers spent days criticizing their Democratic counterparts for even bringing the legislation to the floor.

While the vote was mostly along party lines, five Republicans supported the reform and six Democrats opposed it.

Inside the Weed Legalization Bill the House of Representatives Just Passed

The MORE Act, the first legalization bill to make it to the floor of Congress, would decriminalize marijuana at the federal level, and begin to give back to the communities hit hardest by the War on Drugs

Inside the Weed Legalization Bill the House of Representatives Just Passed

The proposal would end a federal ban on marijuana and create a pathway to expunge related criminal records.

The vote – while largely symbolic because the bill still must pass the Senate – comes only two days after the United Nations took the historic step of reclassifying cannabis as a less dangerous drug.

The bill is a way for Democrats to send a message about their outlook on drugs in a nation where more cities and states already have become more accepting. It creates an excise tax on cannabis sales and directs the money to be targeted to communities adversely affected by the so-called war on drugs.

Members votes 228-164 to approve legislation to decriminalize marijuana at the federal level, removing cannabis from the list of federally controlled substances and expunge federal convictions for lower-level marijuana offenses. 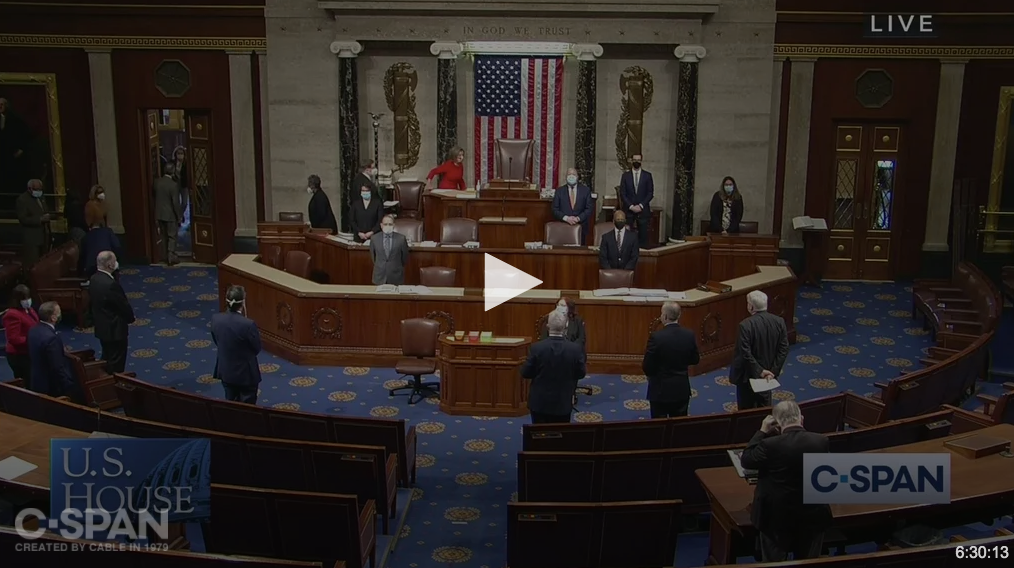 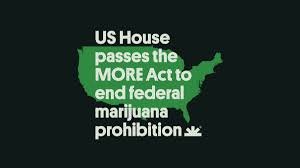