High Times reports that one Ohio lawmaker stands head and shoulders amongst the rest of the Republicans seeking to blame the left of politics for the latest round of mass shooting in the USA.

Her name is Candice Keller, and she’s a Republican state house representative whose district is in the southwestern part of the state, roughly 50 miles to the south of Dayton, where a gunman killed nine people early Sunday morning just hours after another shooter unleashed a massacre in El Paso that has left 22 dead as of this writing.

In a breathless Facebook post, Keller, who is a member of the NRA, the United States Conceal Carry Association, and the Buckeye Firearms Association, made it clear that she has had enough of the finger-pointing from the left. “After every mass shooting, the liberals start the blame game,” Keller wrote. “Why not place the blame where it belongs?” What followed was a torrent of liberal boogeymen—from “drag queen advocates” to professional athletes who kneel during the national anthem, “homosexual marriage” to “the acceptance of recreational marijuana.” Oh, and also “snowflakes.” 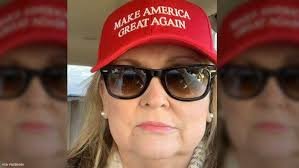