This is what Bloomberg is reporting…….New York is ready to legalize recreational marijuana. The state would impose special pot taxes and prepare to license dispensaries under an agreement reached by Gov. Andrew Cuomo and legislative leaders.

“It is my understanding that the three-way agreement has been reached and that bill drafting is in the process of finishing a bill that we all have said we support,” state Senate Finance Committee Chair Liz Krueger told Bloomberg Government on Wednesday.

The deal that legislative leaders brokered with Cuomo (D) would legalize cannabis use for adults 21 years old and up, and includes a 13% sales tax, 9% of which would go to the state and 4% to the localities, Krueger said. Distributors additionally would collect an excise tax of as much as 3 cents per milligram of THC, the active ingredient in cannabis, with a sliding scale based on the type of product and its potency.

No changes would be made to the taxes already imposed on marijuana sold for medical purposes, Krueger said.

The governor’s office estimates that a legal cannabis program could pull in about $350 million a year once fully implemented. 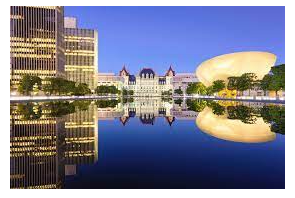