Here’s the introduction to their piece published 2 April 2021

In September 2019, the U.S. House of Representatives passed the “Secure and Fair Enforcement (SAFE) Banking Act of 2019”,1 the first stand-alone cannabis legislation to be approved by the House of Representatives. Earlier this month, revised versions of the bill were introduced in the House and Senate “to reform federal cannabis laws and reduce the public safety risk in communities across the country.”2

A nearly identical bill4 was introduced in the Senate on 23 March by Senators Jeff Merkley (D-OR) and Steve Daines (R-MT). Senator Daines has replaced former Senator Gardner as the lead Republican co-sponsor. The current Senate bill has 29 additional co-sponsors, including six Republicans in addition to Daines, three of which are first-time co-sponsors: Senators Cynthia Lummis (R-WY), Bill Cassidy (R-LA), and Senator Daines himself. In the last Congress, the Senate version of the bill6 had only five Republican co-sponsors. 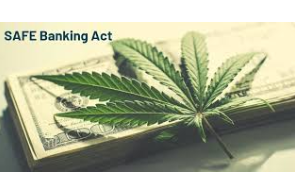