What was once illegal is now a thriving industry. That’s right—I’m talking about cannabis. But my initial statement isn’t entirely accurate. Although Alaska, California, Colorado, Illinois, Maine, Massachusetts, Michigan, Nevada, Oregon, Vermont, and Washington have legalized cannabis, the drug remains a Schedule I narcotic under the federal Controlled Substances Act. While buying, selling, and using cannabis is legal under state law in certain jurisdictions, such conduct is arguably a federal crime in every jurisdiction due to the Controlled Substances Act. It’s a lot to take in, and it gives rise to numerous issues and questions concerning our government’s federalist system. But you all know this blog focuses on intellectual property, so by now I’m sure you’re wondering: what’s the significance to intellectual property of the dichotomy between the way federal and certain state law treats cannabis? Well, to oversimplify the problem, it means that businesses in the cannabis industry are without federal intellectual-property rights, which are by far the most powerful and expansive intellectual-property rights in the country.

Since I deal mostly with trademarks, I’ll address the Lanham Act for purposes of this discussion. The USPTO Trademark Manual of Examining Procedure (“TMEP”) Section 907 explains that “[u]se of a mark in commerce must be lawful use to be the basis for federal registration of the mark.” Section 907 also states, “Generally, the USPTO presumes that an applicant’s use of the mark in commerce is lawful and does not inquire whether such use is lawful unless the record or other evidence shows a clear violation of law, such as the sale or transportation of a controlled substance.” (Emphasis added.) The same section further states that “[r]egardless of state law, the federal law provides no exception to the above-referenced provisions for marijuana for ‘medical use.’” (See TMEP § 907 [citing Gonzales v. Raich, 545 U.S. 1, 27, 29 (2005) and United States v. Oakland Cannabis Buyers’ Coop., 532 U.S. 483, 491 (2001)].) Thus, any attempt to register a trademark relating to the sale or production of marijuana will be refused on the grounds that the applicant’s use of the mark in commerce is unlawful.

Therefore, since members of the cannabis industry are unable to register their marks with the United States Patent and Trademark Office, they are also unable to bring suit for trademark infringement under the Lanham Act. Section 32 of the Lanham Act (15 U.S.C. § 1114) only creates a cause of action for infringement of federally registered trademarks. Additionally, while Section 43 of the Lanham Act (15 U.S.C. § 1125) generally creates a federal cause of action for owners of unregistered trademarks, many believe the federal courts will refuse to permit those in the cannabis industry to avail themselves of this protection. Notably, Section 1125 makes no reference to the claimant’s “use in commerce,” thereby avoiding incorporation of the Lanham Act’s definition of commerce, which is “all commerce which may lawfully be regulated by Congress.” As such, there is an argument that members of the cannabis industry should be permitted to bring suit under Section 43 of the Lanham Act. But until the case law becomes clearer, this may be a risk unworthy of your client’s resources since it may result in a dismissal of your client’s claim after costly motion practice that puts you right back where you started.

Considering the inability to obtain a federal registration and the uncertainty, and partial inability, that creates with respect to policing the subject trademark under the Lanham Act, how can members of the cannabis industry protect their marks? There are two ways and one is certainly more favorable than the other. First, the company can rely upon state trademark laws. While they aren’t as powerful and expansive as the rights provided to holders of federally registered trademarks under the Lanham Act, state registration and trademark laws provide the trademark user with reasonably adequate protections. For example, under California’s Model State Trademark Law (Bus. & Prof. Code § 14200, et seq.), a registered trademark owner obtains trademark rights and the ability to enforce the mark throughout the state. This is a marked improvement over common-law rights, which are geographically restricted to the area where the user conducts business. Thus, under the common law, a Sacramento-based cannabis producer, who only sells product in the Greater Sacramento Area, could only enforce its rights in the same region. As a result, a cannabis producer in Los Angeles could potentially use the same or a confusingly similar mark as the Sacramento-based producer without consequence. That’s not a desirable outcome, and as such, state registration is preferable.

Since federal law prohibits the players in the cannabis industry from engaging in interstate commerce, state-law trademark protection is probably adequate for now. The competition is likely to be the heaviest within the state and therefore being able to enforce trademark rights statewide is probably most important. However, such rights and enforcement mechanisms won’t protect a trademark user in California from a party using a confusingly similar trademark in a neighboring state like Nevada or Oregon. In those instances, the trademark user would likely have to risk relying upon Section 43 of the Lanham Act to bring their claim, but such a claim would likely be futile because the claimant would have to rely upon their common-law rights, which are geographically restricted, and would likely be unable to demonstrate out-of-state use of the relevant trademark. Thus, relying upon the trademark law of the state is clearly an imperfect fix.

It’s evident that the incongruity between federal and state law on cannabis has created significant obstacles to registering and enforcing intellectual-property rights. However, until the Controlled Substances Act is amended, this is the world we live in. Although the uncertainty gives rise to stimulating questions of law, it also creates massive frustration and risk for clients seeking to protect their interests. With that said, with legalization continuing to grow, I suspect the federal courts will provide greater clarity before Congress amends the Controlled Substances Act. It is imperative that intellectual-property attorneys advising clients on these issues keep themselves apprised of such developments. 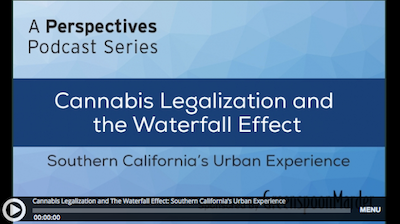