Sounds like a lot of litigation is on the way if these incidences keep occurring and a story this big is going to re-ignite the THC level legislation argument further both at a state and federal level.

BOULDER, Colo. — One day in fall 2018, Bo Gribbon began to vomit and couldn’t stop. He threw up multiple times an hour from morning to night before his mother drove him to the hospital near their home here.

“It felt like Edward Scissorhands was trying to grab my intestines and pull them out,” said Gribbon, then 17.

Over the next nine months, Gribbon went to the emergency room 11 times for the same problem: severe vomiting and screaming at the same time that lasted for hours. When a physician assistant told him the likely cause, Gribbon didn’t believe it at first. He had never heard of marijuana producing a side effect like that.

“The only thing that convinced me was that it stopped when I stopped smoking,” said Gribbon, now 20.

Colorado and Washington became the first states to legalize recreational marijuana in 2012. Several years later, doctors in Colorado and other states are expressing alarm over the increasing potency of cannabis and the health risks it may pose for young users — from psychiatric issues, including violent psychotic episodes, to the mysterious condition that plagued Gribbon.

The condition — officially called “cannabinoid hyperemesis syndrome” but now known to health care workers as “scromiting,” a mashup of “screaming” and “vomiting” — has popped up with increasing frequency at hospitals in Colorado, doctors say.

The ER at Parkview Medical Center in Pueblo saw only five scromiting cases in 2009. By 2018, the number had risen to more than 120, according to data compiled by Dr. Brad Roberts, an emergency room physician at the hospital.

Reports of the syndrome doubled in two different ERs in the state shortly after legalization, according to one study.

Read their full report at  https://www.nbcnews.com/health/health-news/high-potency-weed-linked-psychotic-episodes-mysterious-vomiting-illness-young-n1273463?utm_source=pocket_mylist&mc_cid=679fd3238e&mc_eid=8292ba8d17 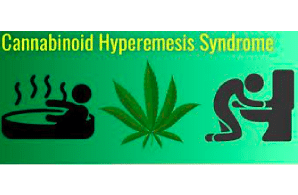