Some of Nevada’s most high-profile attorneys launched into opening statements Friday during a trial over marijuana dispensary licenses that could take months or come to a screeching halt within days. Reports the Las Vegas Review Journal

The lawsuit filed by companies that accused state tax officials of failing to disclose how they picked 61 winners from a pool of 462 applicants for new pot shops in late 2018 has worked its way through the court system for more than a year with those conditional licenses on hold.

And just before the trial started, William Kemp, who represents the parent company of Planet 13, which was denied a new license, told District Judge Elizabeth Gonzalez that several of the companies at odds were a “smidge” away from a settlement.

Because of the continuing pandemic and because the legal dispute involves so many companies vying for a finite number of opportunities to open a new, potentially multimillion-dollar business, the trial was moved to a makeshift courtroom at the Las Vegas Convention Center.

Kemp bounced in and out of the courtroom with fellow lawyers, trying to hammer out a deal, as former Nevada Secretary of State Ross Miller offered his opening statement.

Also representing a company denied a new license, Miller compared the state’s budding marijuana industry to the start of its gambling economy and accused the Taxation Department of manipulating the pot licensing process.

“This wasn’t fair. It wasn’t right,” he said. “This is what the state is about at the end of the day. This is about who we are, when the world is looking. … That’s why we’re here, and we want the resolution we’ve asked for. … Now we’re stuck in world war weed, trying to get to the bottom of the truth.”

More than 40 masked lawyers, along with court staff and observers, lined socially distanced tables and chairs inside the nearly 17,000-square-foot space.

The judge asked the attorneys to wipe down the lectern with disinfectant before each statement.

Gov. Steve Sisolak’s criteria for Phase Two of the coronavirus pandemic recovery plan states that public and private gatherings should be limited to no more than 50 people, but it also carves out an exception for events “providing essential services to the public.”

Earlier in the morning, Theodore Parker, who represents Nevada Wellness Center, sent a letter to Gonzalez and her staff, saying he had recently been exposed to someone who tested positive for the novel coronavirus and would be undergoing a test “out of an abundance of caution.”

He did not write in the letter whether he would receive the test at the University Medical Center COVID-19 testing center, taking in thousands of patients in the same building, just steps away from the stairs leading to where the trial was being held.

Rather than delay the trial while the lawyers negotiated, or wait to determine whether Parker tested positive, the judge pushed forward.

A positive test among those involved in the trial could upend the entire proceedings ………. 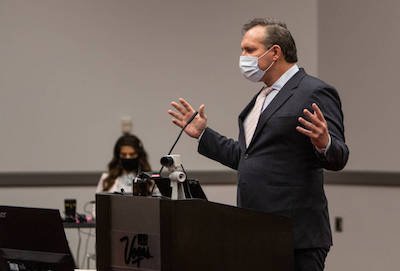