Police in Catalonia have seized dozens of marijuana plants from a roof terrace after social media users spotted the plantation in video footage filmed by a helicopter following the Vuelta a España cycling race.

Officers from the regional force, the Mossos d’Esquadra, headed to the town of Igualada, north-west of Barcelona, after video from Saturday’s stage eight was posted on social media.

“We received information via social media that there was a marijuana plantation on the roof of a block of flats in Igualada,” said a spokeswoman for the force.

“We began an investigation, which is still under way, and we have seized 40 plants. For the moment, there have been no arrests.”

She added that officers were trying to determine who the plants had belonged to as the roof terrace was not connected to the flats. 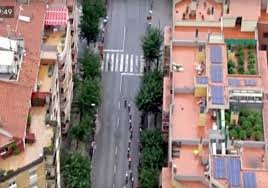