A New Jersey Senate committee approved a pair of bills on Thursday that would allow licensed marijuana businesses to deduct certain expenses on their state tax returns, a partial remedy as the industry continues to be blocked from making federal deductions under Internal Revenue Service (IRS) code known as 280E.

The Senate Budget and Appropriations Committee took up companion measures from its chamber and from the Assembly, making them identical before advancing them in a unanimous vote.

The version from Assemblymember Annette Quijano (D) passed that full chamber in October. It was previously amended in committee, with members agreeing to remove an earlier provision that would’ve made it so only cannabis licensees with gross receipts less than $15 million would be eligible for state tax deductions.

The Senate version was amended on Thursday to include those Assembly revisions before both were approved together. 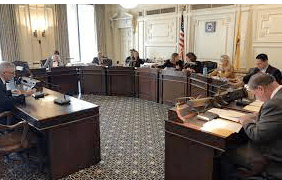