NM’s “non political report” website gives some background to the politics behind the slow move to recreational and improvement of medical cannabis access in the state. Worth a read.

A group tasked with creating a proposal to legalize cannabis in New Mexico met for the second time to discuss specifics of licensing and regulation as well as how to maintain a medical cannabis program.

Gov. Michelle Lujan Grisham’s Working Group on Marijuana Legalization met for more than five hours on Wednesday and heard from a couple dozen members of the public.

This is for the naysayers

Pushes for cannabis legalization in the Legislature are nothing new. For years there have been attempts to legalize cannabis by changing the state constitution, as constitutional amendments do not require approval by the governor, and former Gov. Susana Martinez vocally opposed the idea. But the last legislative session showed increased signs of success for proponents. Two different bills, one that pushed for state-run stores and sponsored by Senate Republicans and another without a state-run store provision, saw increased support.

Rep. Javier Martinez, D-Albuquerque, sponsored a legalization bill in the House and he is now a member of the working group. Martinez said he thinks the group’s “cognitive diversity” will help convince lawmakers who are against legalization, but still open to the idea.

“I think that out of this process will emerge consensus across the board,” Martinez said. “There are some folks who are going to be opposed to legalization across the board and I don’t think we’ll ever convince those folks.”

Albuquerque City Councilor and working group chair Pat Davis agreed there are still lawmakers who will never change their minds about legal cannabis, but used Colorado as an example of how opposition can be the group’s best tool. Davis said when Colorado legalized recreational use cannabis through a voter initiative, some lawmakers stepped up to promulgate rules that made the law more palatable.

“Those folks who are genuinely opposed to this and have found a compromise to implement legislation are our best allies, because you have folks more inclined to my ideology who say this is just not an issue,” Davis said. “We’re not good messengers to them, they don’t trust us because we don’t see this as an issue.”

Emily Kaltenbach, the director of the Drug Policy Alliance in New Mexico, said she is hopeful that diverse voices in the group will help convince lawmakers down the road.

“I think those people who are on the fence are probably more likely to listen to some of those voices who aren’t necessarily in the central corridor [of New Mexico],” Kaltenbach said.

One of those voices she was referring to was Doña Ana County Sheriff Kim Stewart.

Stewart was picked by the governor’s office to serve on the working group and within days of her appointment she began meeting with her constituents to hear their thoughts on the issue.

“The meetings I’ve held, I started out just thinking, ‘lets see what the interest is,’” Stewart said. “The interest is enormous.”

Even though all of the actions the group took on Wednesday will simply guide the Legislature in the crafting of a legalization bill, at least two groups are speaking out against cannabis legalization.

Read more at the link 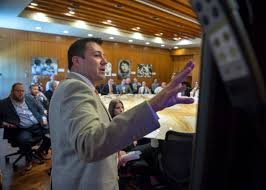