Published by the First Wednesdays network, with insights provided in partnership with Hanway Associates and Invest In Denmark (part of the Danish Ministry of Foreign Affairs).

What Lies Ahead Medical Cannabis in Denmark

A mix of socialised healthcare, a pharmaceutical heritage, and being later to the party than the US and Canada has created a strict medical approach to cannabis medicines – one that is (mostly) with the grain of the medical establishment, not against it. Compare two investor decks from both sides of the Atlantic and you can quickly see the differences in how we talk about cannabis as a medicine, how it should be controlled and the regional-specific concerns its proponents need to address.

Market projections and financial analysts point to the large population of Europe and talk about how demand will surpass all expectations in the years to come. But how does a nascent market struggling to find its footing become the behemoth it is expected to be one day? We decided to look under the hood of some of the most exciting companies, markets and trends to find out where the real potential lies.

The promise of foreign investment, job creation and economic growth is alluring, but the journey towards a sustainable and commercially profitable sector is a long one, and Europe is just at the beginning of this journey.

Without companies that tackle regulators’ concerns around black market diversion, the lack of patient data, or doctors’ unfamiliarity and cautiousness in prescribing a medicine that has typically been consumed as a combustible, there will be no real longterm growth in the sector. Companies solving these problems already exist, and their presence is promising.

Patient data apps, medical devices, formulation technologies and plant R&D are propelling the sector towards its ambitious goals. The sector is truly aspirational and full of problem solvers, giving us great faith in its chances of success.

We are already seeing signs that the sector is being taken more seriously by regulators and corporates alike. State-supported cannabis startups and the appearance of more mainstream pharmaceutical companies on the scene are two indications that this is happening.

Two European states, Denmark and Greece, which have recently embraced the medical cannabis sector have already attracted proposed foreign investments of more than €610 million according to recent reports.

From Copenhagen to Berlin, life science start-ups jostle for capital and new specialist cannabis investment funds in Stockholm and Paris stoke investor interest in the sector.

UK financial regulators have announced that British-based medical cannabis businesses have a compliant path to the public markets in London, while Scandinavian stock exchanges signal they are open for business.

Competition in crowded markets such as Germany pushes competitors to innovate with their supply chains, breaking established monopolies; meanwhile, Spain, a world leader in morphine production, dips its toes in the arena through traditional pharma routes. Underpinning all this innovation is research.

The Netherlands is home to approximately 30% of Europe’s active cannabis and cannabinoid clinical and Germany home to another 15% trials, with the UK following closely with 20% Whatever your thoughts about the market, the right foundations are being laid for a very interesting journey over the coming years. 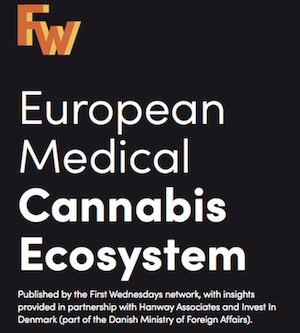