In the US, millions are convicted with marijuana-related crimes. For this reason, they have an impaired ability to apply and obtain loans, housing and jobs.

But today,   there can be good news for them as bold and new moves are being taken by legislators who are trying to address past marijuana-related crimes.

Now, California county prosecutors can use a program to reduce or even erase about 220,000 cannabis convictions following voters legalizing the drug in 2016.

Earlier this month, the Code of America announced that it’s making its computer algorithms to be available for free to 58 district attorneys.

This program from the San Francisco headquartered nonprofit technology organization allows free access of the computer program that allows finding eligible cases in court documents that may be as old as decades.

There are six counties, such as San Francisco and Los Angeles, earlier that used Clear My Record, but on a trial basis. It aims at clearing about 75,000 marijuana convictions.

The voters approved eradicating some cannabis-related crimes as well as reducing the felonies to misdemeanors or eliminating other past criminal convictions when they’ve legalized marijuana consumption in 2016.

In relation to the latest developments, prosecutors in San Diego and San Francisco counties announced that they’d review, resentence, recall and even dismiss misdemeanor and felony cases.

Joining the movement is Seattle City Attorney Pete Holmes, asking a court to vacate all the convictions as well as dismiss all the charges for felony or misdemeanor cannabis possession, which were prosecuted before California legalized recreational marijuana in 2012.

Burlington and Denver, Vt. prosecutors are looking into similar actions according to their representatives.

For a decade, low-level pot offenses prosecutions were low priority in Denver. But in the state, Ken Lane, who is a representative for Beth McCann, the newly elected DA told that even if McCann has not applied the laws of the state for post-conviction relief, she’s asked staff to look into and research the matter in relation to what the DAs in California are doing.

In Vermont, another prosecutor is looking into the matter. It became the first state to legalize cannabis via the legislature, not through a ballot measure.

Meanwhile, in Chittenden County, Deputy State’s Attorney Justin Jiron told a source that his office is about to announce the latest policy, allowing applicants to file an application so that their past possession records be expunged/sealed no matter when the conviction has taken place.

Even if it’s not an immediate and bold action like that taken by San Diegans and San Franciscans, it’s still a meaningful step.

Jiron said that the simplest way of looking at the issue for them was that those people have convictions and that if they’d commit those cannabis-related offenses now, they wouldn’t anymore be a crime.

He added that it seemed unfair to saddle those people with a conviction for cannabis, which is now legal.

As even if the public opinion and laws are changing, those past convictions could still haunt people, he said.

Jurisdictions, where pot is legal, have the power of offering such relief for those who were convicted of cannabis offenses. However, still many are not using such power to offer immediate relief.

For example, the law in California requires convicted individuals to apply for relief for the past marijuana-related crimes, but this process can be time-consuming and expensive.

For the prosecutors, they could speed the process up by following the automatic process used by San Francisco that offers more immediate relief.

Also, the prosecutors in jurisdictions where it is legal to buy weed at a cannabis dispensary could follow the lead of Holmes in Seattle and use their state laws to look into and move for relief for previous marijuana offenses.

However, the laws vary and are complex per state, including on dismissal, sealing and expungement, which up to now have no standard definition across the states.

On the other hand, some states don’t address and offer past criminal conviction relief and others need a governor’s pardon in order to vacate a conviction. In some states, they allow post-conviction relief but such can take long waiting times as well as limits on the types of convictions to remove.

Of all these developments, one thing is clear. Even states where a medical marijuana card does not have the same stand on the matter of offering relief to individuals with past marijuana-related convictions. 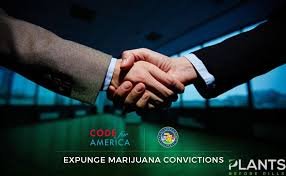