New Zealand: New Survey Shows Increased Support For Cannabis Regulation & Especially Amongst Women.. Even 1/3rd Of National Voters Say They Will Vote In The Affirmative !

Less than three months out from the General Election, an independent survey of nearly 1,600 Kiwis shows 56% will vote for legalising the personal use of cannabis at the referendum – up from 54% in February.

“This result will energise both the yes and no camps. It shows just how close the vote will be, with 81% of Kiwis also declaring that prohibition has failed to limit cannabis access and use. The opportunity for wider reform is something all New Zealanders must start thinking about,” says Paul Manning, Chief Executive of Helius Therapeutics.

“This is a polarising debate but despite prohibition, cannabis is already widely accessible in New Zealand. September’s referendum is fundamentally a decision about who we want to control cannabis. Government-led control would weaken the stranglehold gangs have on our communities. Reform transfers cannabis access to a regulated, locally-owned businesses, delivering jobs and tax revenue, while ushering in quality standards and strict access controls,” says Mr Manning.

With overall support at 56% and those against at 43%, down from 45%, the June survey also reveals women favour legalisation more than men. Since February support for legalisation among women has risen 4% to 59%, with 52% of men set to vote yes.

Legalising the personal use of cannabis achieves majority support among all Kiwis deemed young adults or middle-aged – 18 to 64-year-olds.

Senior New Zealanders are the only group opposed, but support among older demographics has been steadily increasing throughout Horizon’s series of tracking surveys.

With support peaking at 72% among 25 to 34-year-olds, youth turn-out will be important for proponents, particularly young adults who support centre-left and liberal parties.

Notably, New Zealand First voters have now shifted to support reform. In fact, based on survey respondents’ 2017 party vote, voters for four of the five parties currently in Parliament now support legalisation, up from two in February.

53% of New Zealand First voters and 70% of ACT voters will now tick yes at the referendum – up from 46% and 45% respectively in February.

Support continues to firm up among supporters of the two main centre-left parties, with 72% of Labour voters and 81% of Green voters intending to vote in favour of cannabis legalisation – up from 64% and 78% respectively.

Only National voters remain opposed, although nearly one-third say they will vote yes. Among National voters, support is now at 31% – up from 27% in February.

With overall support now at 56%, the large public survey has tracked support steadily returning for personal-use cannabis legalisation, after it bottomed out 10 months ago.

To better emulate the choice voters will have when they vote at the upcoming referendum, the two latest surveys removed the previous ‘no opinion’ option, forcing a yes or no response. This equally lifted both support and opposition to reform. 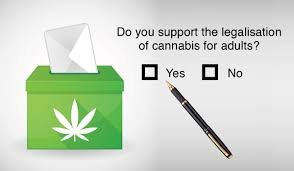