We don’t normally highlight busts but this story gives an indication of the size of the black market in countries like Nigeria. 10 Hectares is 25 Acres. Not a small grow !

Odolu (Kogi) – The National Drug Law Enforcement Agency (NDLEA) in Kogi, in the early hours of Thursday, destroyed 10 hectares of cannabis sativa (Indian hemp) plantation, as part of efforts to rid the state of hard drugs.

The News Agency of Nigeria (NAN) reports that NDLEA officials, who stormed the Igolijo community in Igalamela-Odolu Local Government Area of the state at about 5.30 am. for the operation, also arrested the prime suspect, James Ameh, and six others.

In the operation jointly carried out by a team of NDLEA operatives and men of the Nigeria Security and Civil Defence Corps (NSCDC), led to the arrest of six other suspects alongside the prime suspect.

Ameh, 55, and father of 10, who had earlier tried to escape, was overpowered and apprehended with a fully-loaded pump action gun, which he claimed to have collected as a collateral from a friend owing him N80,000, pending payment of the debt.

“I am not the real owner of this pump action gun. It belongs to a friend who is owing me N80,000. I collected it from him as a collateral pending when he would pay back the money which I needed urgently to do something.

“I’m sorry; I never knew that having this in my house will put me in trouble. As for the issue of dealing in drugs and having hectares of land for cannabis, it is also not true”, he said.

Ameh, who is also a native doctor from Ete, a boundary community between Olamaboro Local Government Area of Kogi and Enugu State, denied knowledge or ownership of the 10-hectare cannabis plantation, even while on the farm.

Speaking with NAN after setting the entire farm ablaze, the NDLEA Commander in the state, Alh. Idris Bello, said that the suspects had been on the wanted list of the agency in the last few months.

Bello said that the operation was the result of a thorough intelligence gathering by officers of his command on the existence of the plantation and the activities of the suspects peddling the hard drugs between Kogi and Enugu States.

He commended the state government and Gov. Yahaya Bello for the support given to NDLEA in its bid to rid the state of hard drugs and illicit psychotropic substances, for the attainment of a sane and safe state.

The Commander, however, warned that whoever was caught engaging in illegal drug business would be made to face the full wrath of the law.

Bello, who said that a pump-action gun and seven live cartridges were recovered from the suspects, said that they would be charged to court as soon as investigation into the matter was concluded. 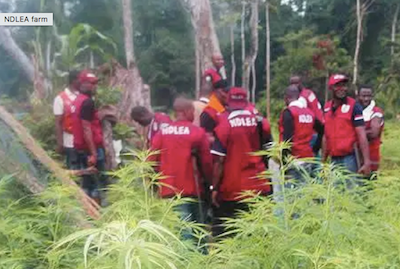