North Dakota – Is Recreational Cannabis On The Way ?

BISMARCK — A bill to legalize adult use of recreational marijuana, already passed in the House, now awaits action in the North Dakota Senate.

House Bill 1420 is seen in part as a way to forestall another ballot measure seeking to open the door to recreational marijuana more widely. In 2018, Measure 3 failed, only receiving 40% of votes cast. Rep. Jason Dockter, R-Bismarck, the bill’s sponsor, said he would rather have the Legislature have control over the laws rather than possibly having recreational marijuana in the North Dakota Constitution.

With neighboring states legalizing marijuana, Dockter said he felt it was only a matter of time before a ballot measure would pass legalizing marijuana in North Dakota. “I believe it is our job of our lawmakers to have good policy, even if you don’t agree with the topic of the bill,” he said.

Dockter, who said he doesn’t use marijuana himself, testified on the bill March 15 before the Senate Human Services Committee.

“A lot of times we are reactive as government and I wanted to do something proactive,” he said.

“If we don’t do it now, it is going to come through as an initiated measure.”

HB 1420 passed through the House by a vote of 56-38, with vocal opposition coming from representatives who are against legalizing recreational drug use 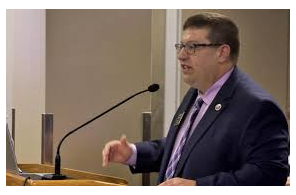