NY: How a banker and lawyer died after their cocaine orders were laced with fentanyl

Ross Mtangi, a trading executive at Credit Suisse, left his Manhattan penthouse in March 2021 with his laptop and told his pregnant partner he was going to work.

He checked into a nearby hotel and tuned in to work calls. Later, he texted for cocaine from a drug delivery service. A man wearing a baseball cap, cross-body bag and face mask appeared on hotel surveillance.

Mtangi, 40 years old, missed a follow up meeting. His sister and her partner found him dead at the hotel the next day. Police found on a table translucent black baggies that contained lethal fentanyl mixed in with the cocaine.

Social worker Amanda Scher, 38, did the same. She died in the Greenwich Village apartment she shared with her Chihuahua-Corgi rescue dog. It was a stone’s throw from where she had received her master’s degree at New York University.

The three high-achieving New Yorkers had texted the DoorDash-style cocaine delivery service on a late winter Wednesday. They all died from the illicit fentanyl that had been mixed into it.

March 17 in New York City is usually festive for St. Patrick’s Day. In 2021, the parade was cancelled for a second year and most big company offices were shut. Only around 30% of adults in the city had received at least a first dose of a Covid-19 vaccine.

In the East Village, Ghahramani, the litigation associate, was one of millions of young Americans starting their career outside of a workplace. She had graduated virtually from Columbia Law School in May 2020 while her parents snapped photos of her and the screen in their Greenwich, Connecticut, living room.

The daughter of Iranian-born Sassan Ghahramani, an investment research firm founder, and Lily Ann Marden, a real estate finance executive, Ghahramani made a vow in high school to somehow change the world. She helped give pro bono legal advice to immigrants and advocated for gun control. She spoke on the steps of City Hall as a main organiser of a “March for Our Lives” attended by 150,000 following the Marjory Stoneman Douglas school shooting in February 2018.

For much of the pandemic, Ghahramani retreated to her family’s home to work remotely and spend time with her parents and younger twin siblings.

Her final week, Ghahramani headed back to her Avenue B apartment, saying she had work to do before a family trip the next weekend to celebrate the Persian new year. Ghahramani told friends and family the workload was intense but that she was loving her first job.

On Wednesday, Ghahramani sent a text to a phone that prosecutors said belonged to the alleged dispatcher for the drug delivery service, Billy Ortega.

According to his lawyer, Ortega was a stay-at-home dad in a house in rural New Jersey. According to prosecutors, Ortega arranged drug deals from the house. He pleaded not guilty to causing the three deaths and distributing drugs and is awaiting trial.

“Can u come thru?,” Ghahramani wrote.

“I’ll send them right now if you want.”

“That would be great thank you really appreciate it.”

“No worries we family.”

After getting the text, prosecutors said, Ortega asked a courier, Kaylen Rainey, to handle the day’s deliveries. Ortega sent him Ghahramani’s address and instructions to collect $200, prosecutors said, citing texts on their phones.

He and another courier rented Zipcars to deliver drugs to neighbourhoods across Manhattan, prosecutors alleged, collecting up to thousands of dollars a stop. Rainey pleaded not guilty to causing the deaths and distributing drugs and is awaiting trial.

Around six hours after the delivery, her phone pinged.

Seven calls came in that night and the next morning from the delivery-service number.

Marden woke that morning in Connecticut knowing something was wrong because she hadn’t heard from her daughter. A friend of Ghahramani went to the apartment and found her dead, holding her phone. Persian pastries she had ordered for the weekend were in the refrigerator.

“She made a mistake,” Ghahramani said. “She had a hit of coke and unbeknownst to her it was loaded with fentanyl and it killed her.” 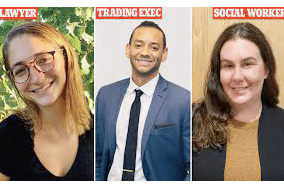