A man is facing a long list of charges after a search for a missing juvenile led to a large drug bust Thursday in Circleville.

Circleville Police were attempting to locate a missing juvenile Thursday morning and during the investigation, officers received information that the juvenile was possible in the area of South Court Street.

While searching for the juvenile, detectives located a suspicious car in a Sheetz parking lot. When officers made contact with the suspect, police said he refused to identify himself or say what he was waiting on.

The suspect was later identified as Peter T. Hayes, 34, of Columbus.

According to police, officers spotted drug paraphernalia in Hayes’ vehicle and when they asked him to get out, he rolled up the window and drove off at a high rate of speed.

Police said Hayes sped through the parking lot and slowed down when he was on South Court Street. Police believed he was about to run on foot and because of his previous reckless driving and children seen in the area, police decided to park a cruiser in front of Hayes’ vehicle to keep him from striking any innocent bystanders.

Police said that’s when he rapidly accelerated and struck the cruiser in the front passenger side and drove away. According to police, he slowed down again and officers were could see him reaching into the driver-side floor area.

The officer who initially tried to stop Hayes again pulled in front of his stopped vehicle, and again, Hayes rapidly accelerated and struck the cruiser again, police said.

Police said Hayes refused to open the door or get out of his vehicle and officers were forced to break the window and unlock the door and remove Hayes from the vehicle.

Police located a .22 caliber handgun in the floorboard between the gas and brake pedals. 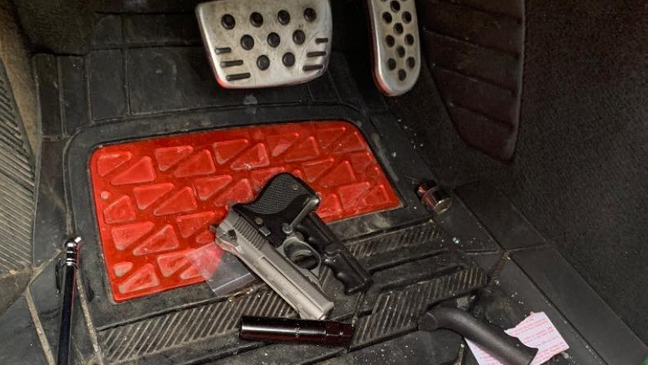 A .22 caliber handgun found in the floor board of Peter Hayes’ vehicle. (Circleville Police Department)

Inside the vehicle, police found 177.5 grams of DMT, 1 gram of meth, and 1 gram of fentanyl. According to police, the confiscated DMT is 17 times the amount of Schedule 1 narcotics and has an estimated street value of over $53,000.

Hayes was arrested and charged with three counts of trafficking in drugs, three counts of possession of drugs, weapons under a disability, carrying concealed weapons, improperly handling a weapon in a motor vehicle, two counts of felonious assault, vandalism, and failure to comply.

Police said he had multiple warrants for his arrest including possession of dangerous drugs, failure to appear and fleeing.

Hayes was taken to the Pickaway County Jail.

“We are fortunate this potentially dangerous situation was able to be resolved quickly with no serious injuries,” the Circleville Police Department said.