We’re not sure how far they’ll get with this?

An East Toledo organization that operated outside of Ohio’s rules is now challenging those restrictions in a civil lawsuit in U.S. District Court in Toledo after police raided the business and seized thousands of dollars worth of its products.

Urban Plant Wellness, located in the 900 block of Starr Avenue, filed the suit Wednesday, after police seized in April about $240,000 worth of suspected marijuana, along with drug paraphernalia, a handgun, and a Ford F-150 truck.

“The answer, obviously, is that no marijuana business is legal unless they have qualified under state law for a license,” said Keith Stroup, who serves as legal counsel for NORML, an organization working to reform marijuana laws.

Here’s the original report about the raid

According to reports from the Toledo Police Department, a search warrant was executed on an unlicensed Ohio cannabis dispensary in East Toledo believed to be an illegal cannabis store. Over $200,000 worth of cannabis products and other edibles were confiscated along with a handgun and a large amount of cash.

The suspected illegal dispensary, Urban Plant Wellness, according to their official website is a collection of members searching for natural healthcare options for themselves. While the website does not clearly state that they sell anything, it makes references to cannabis, and edibles.

There are over 50 licensed cannabis dispensaries in Ohio and 4 located in Northwest Ohio, Urban Plants Wellness was not one of them, thus, making their operation illegal. Since the raid, their social media pages have all been inactive and have not made mention of the raid.

Items Found In The Raid

Reports from the Police Department reveal that 150 pounds of cannabis and other cannabis-related products valued at $240,000 were found in the store. In addition to that, $7,300 in cash was found as well as drug packaging items, paraphernalia, a handgun, miscellaneous paperwork, and a vehicle.

While three people were present in the store at the time of the raid, the Police Department reports that no arrests were made as a result of their efforts. However, pending the examination and careful analysis of the contents found in the Ohio cannabis dispensary, the department is considering pressing charges. 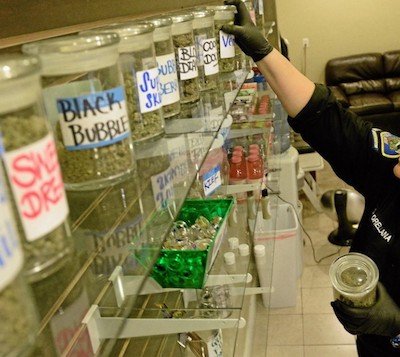