Medical marijuana patients and people who work in the fledgling industry rallied at the Oklahoma state Capitol on Friday to show support for the state’s marijuana laws and to call for increased transparency from the state entity that regulates cannabis.

Despite intense summer heat, rallygoers vented about the Oklahoma Medical Marijuana Authority and criticized new emergency rules that add temporary regulations to the industry as a result of legislation passed this year.

Tulsa attorney Ron Durbin announced plans to sue the Medical Marijuana Authority over how those emergency rules were adopted, alleging the entity violated the state’s Open Meeting Act. The lawsuit was not publicly available at press time.

Durbin is also suing the Medical Marijuana Authority over the costs business owners could face when the state implements a seed-to-sale tracking system for marijuana.

“We don’t want to do this, this is ridiculous that we have to continue to do this stuff, but if they keep forcing our hand, we’re going to keep doing it,” he said. 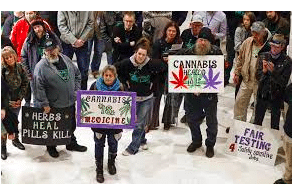