Maria White of the firm’s Cannabis Group  writes…..While most Americans focused on the Presidential race, election day also produced newsworthy developments in the regulation of cannabis and other controlled substances. Every single drug policy reform measure that was on the ballot in states across America passed.

Arizona, Montana, New Jersey and South Dakota all voted to legalize recreational cannabis on November 3rd. They will join 11 other states and the District of Columbia, who have previously established recreational markets:

Meanwhile, Mississippi took its first step toward the normalization of cannabis by legalizing medical marijuana. Mississippi voters said yes to two medical marijuana measures: one allowing it for people with terminal illnesses and one allowing it for people with “debilitating medical conditions.” The more-liberal latter option (Initiative 65) saw 74 percent of voters in favor.

Similarly, Oregon voters on Tuesday’s election day made history by becoming the first state to decriminalize all drug possession; this means personal drug use and psilocybin therapy are now legal in Oregon. Nearly 59 percent of voters approved the decriminalization provisions of Measure 110, with 80 percent of precincts reporting; nearly 56 percent of voters approved of Measure 109, the Psilocybin Services Act, which authorizes the Oregon Health Authority to start “a program to permit licensed service providers to administer psilocybin-producing mushroom and fungi products to individuals 21 years of age or older.”

And finally, in the District of Columbia more than three-quarters of voters approved Initiative 81 to decriminalize “plant psychedelics.” The newly adopted referendum declares “that police shall treat the non-commercial cultivation, distribution, possession, and use of entheogenic plants and fungi” [i.e., those that contain ibogaine, dimethyltryptamine, mescaline, or psilocybin] among the lowest law enforcement priorities.” Five other U.S. cities have already taken similar measures; Oakland and Santa Cruz, CA and Denver, CO have decriminalized psilocybin within city limits, while Ann Arbor, MI’s City Council adopted a resolution earlier this year declaring entheogenic plants the city’s lowest enforcement priority.

Psilocybin-assisted psychotherapy has been studied for decades as a potential treatment for emotional conditions like anxiety, depression, and addiction. As a result of Measure 110’s passage, millions of dollars in tax revenue are expected to fund addiction treatment facilities, and a state-supervised fund that will pay for drug programs, treatment and housing. Supporters also argued that Measure 110 will address racial inequities in the legal system because drug charges disproportionately target people of color.

According to advocates in favor of Measure 110, each year there are over 1.6 million drug arrests in the United States each year, and over 85% of those arrests are for possession only. Drug decriminalization removes criminal penalties for any drug possession that is for personal use only. Proponents reason that decriminalization free up more money for law enforcement and social services by significantly reducing prisoner populations. The advocacy group Drug Policy Alliance spent more than $4 million backing the measure.

In the case of Oregon, the voters’ passage of referendum Measure 110 means the state’s residents will no longer face arrests or prison sentences for carrying small amounts of drugs like cocaine, heroin, OxyContin, and methamphetamine. Instead, the measure reduces drug misdemeanor charges to noncriminal offenses, institutes a $100 fine, and requires offenders to be screened for drug addiction. For people caught with large quantities of regulated substances, the penalty has been reduced from a felony charge to a misdemeanor. The measure also lays out groundwork for people with addictions to receive treatment as opposed to jail time.

Despite its election day success, the measure was opposed by the Oregon District Attorneys Association and local drug and addiction organizations. Critics argued there aren’t enough beds at drug treatment facilities in the state, and some claimed drug users confront addictions only under the threat of imprisonment. Nevertheless, Measure 110 also had high-powered backers. In addition to the Drug Policy Alliance’s spending, Facebook founder and chief executive Mark Zuckerberg and his wife, Priscilla Chan, gave $500,000, according to the Oregonian. Moreover, the Oregon Academy of Family Physicians, Oregon Nurses Association and the Oregon chapter of the American College of Physicians endorsed Measure 110.

While election day 2020 failed to answer who would occupy the White House for the next four years, it made clear that the nation is ready to turn the page on legalization of cannabis and other controlled substances.

Maria White is a member of GrayRobinson’s Cannabis Law Group, focusing on the laws that govern the production , distribution and retail dispensing of medical marijuana, recreational marijuana, CBD, hemp and other cannabis derivatives. Ms. White is a recent graduate of Stetson Law School. 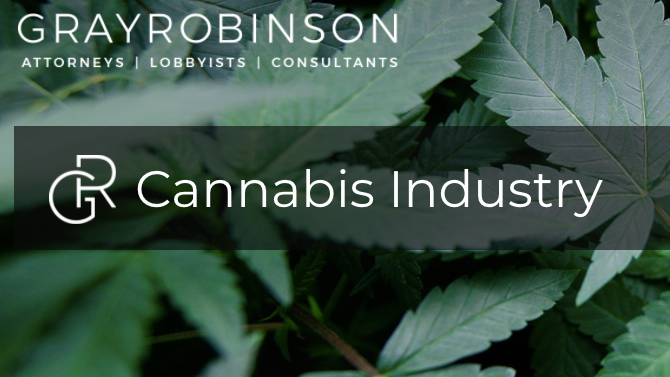