Licensee failed to test its products before selling them to consumers

Portland, OR — The Oregon Liquor Control Commission is issuing an immediate health and safety recall for marijuana vaping products sold under the “Naked Extracts” and “Native” labels. An investigation and interviews with the licensees have revealed that the affected products contain marijuana-derived ingredients (terpenes) from out-of-state, and the Naked Extracts and Native marijuana products had not been tested for the presence of ingredients harmful to human health after these ingredients – untested according to Oregon standards – were added. These vaping products were then distributed into the Oregon consumer cannabis market.


An OLCC investigation discovered the licensee of Naked Extracts, LLC., has been using marijuana derived terpenes (flavorings) produced and distributed by True Blue, a California based company. The use of marijuana derived ingredients, including terpenes, sourced from non-OLCC licensed businesses is prohibited under Oregon law and OLCC rules.

The licensee also admitted to adding the marijuana terpenes to Naked Extracts and Native products after the products had been tested for potency, pesticides, and solvents. All final (consumer ready) products sold into Oregon’s regulated cannabis market are required to be tested.

In an attempt to resolve the recall aspect of this investigation, on May 6, 2021 the OLCC notified Naked Extracts, LLC of the investigation, and provided the company with the opportunity to issue a voluntary recall until the investigation is completed and the matter resolved. During the two-week period since initial notification, the licensee did not progress in its pledge to execute a complete recall. Therefore, in order to prevent additional delay and further potential harm to public health, the OLCC is issuing the mandatory recall under its authority to recall products that contain marijuana-derived ingredients from outside the licensed system.

Consumers can identify the affected products with the following information: 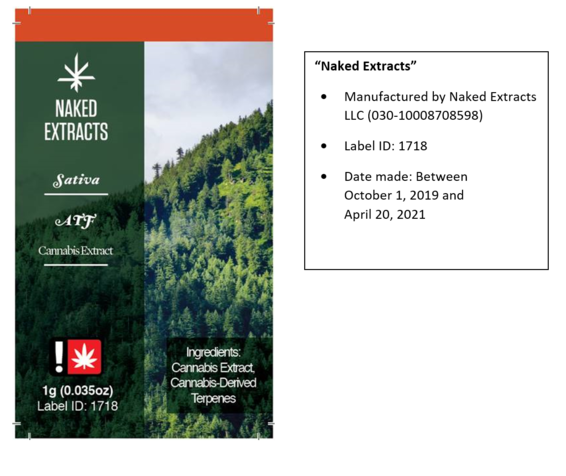