Now only a week away, ORCA’s April Monthly Membership meeting will be held (virtually) on Monday, April 26th at 6:45pm — where we’ll be joined by the OLCC’s Executive Director Steve Marks to talk about both the latest round of rule changes the agency has undergone, as well as getting his take on his the bills working their way through Salem will impact how we operate.

This one is sure to be a great one — so don’t miss it!

Our April meeting will FOCUS ON THIS YEAR’S LEGISLATIVE SESSION, INCLUDING PROPOSED TAX INCREASES and other bills being discussed in Salem presently – which would have massive impacts on our industry at a time when we remain nascent and vulnerable.  At our meeting, we’ll be going over the specific bills, how we can fight them, and our plan for the future.

We’ll also be going over the latest news about the Cannabis Equity Act (HB 3112), which will hopefully see some more movement in the coming weeks.

Plus, we’ll continue to highlight the ongoing efforts of our staff and other allied stakeholder groups on some of the other important legislative packages we’ve been working on this year – many of which are moving at a brisk pace through the policymaking process. These will include an overview of some of the positive things we hope to achieve with SB 408, our Cannabis Omnibus Bill. 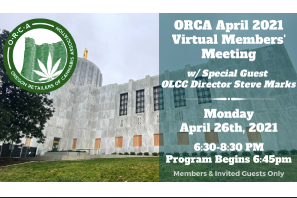