“[Agents] eradicated 635 hectares of marijuana crops and more than 23 tons of the prepared drug,” SENAD said in a statement. “In total, they put 1,928 tons of cannabis out of circulation,” SENAD added.

The operation had the support of Paraguayan Air Force helicopters and the PF. (Photo: Paraguayan National Anti-Drug Secretariat)

With the support of Paraguayan Air Force helicopters and the PF, anti-drug agents entered forest areas where criminals had hidden illicit crops.

“During the 15 days [of the operation], [agents] raided the narco-sectors in areas of Cerro Kuatiá, Alpasa, and Bella Vista Norte, Amambay department,” the Paraguayan newspaper Hoy reported.

The 25th phase of Operation New Alliance took place at a time of special cooperation between the Paraguayan and Brazilian security forces.

On March 29, in Brazil, SENAD and PF agents captured Jorge Teófilo Samudio, alias Samura, a Paraguayan national who is believed to be one of the main narcotraffickers in Paraguay.

“The prisoner was the leader of a Paraguayan criminal organization that had strong connections with a Brazilian faction operating in Rio de Janeiro, and [he] was responsible for sending large shipments of cocaine to Brazil,” the PF reported.

According to SENAD Minister Zully Rolón, the special forces of both countries have carried out 177 joint operations in seven years of cooperation, seizing 6,939 kilograms of cocaine and eradicating 48,420 kg of marijuana.

“It’s been seven years of successful bilateral cooperation. I think that we’ve had successful procedures,” Rolón said at a press conference on April 19, after meeting with Paraguayan President Mario Abdo and Brazilian Ambassador to Paraguay Flavio Soares Damico.

The operations led to the arrest of 277 people. In addition, authorities expelled 16 Brazilian nationals who had arrest warrants in their country, Rolón said in statements published by the Paraguayan newspaper La Nación. 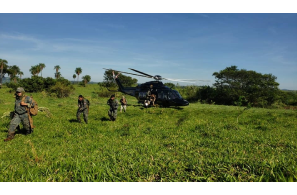