Joseph Molitor believed his legal woes were over.

He was cleared of drug charges filed in 2019, after authorities mistook legal hemp flower he sells for marijuana, freeing the former Old Forge man to resume operating the CBD Shop of Northeastern Pennsylvania. He restarted the business in West Pittston, Luzerne County, as online-only, selling hemp and various cannabidiol-infused, or CBD, products without fear of arrest — or so he thought.

On May 27, West Pittston police seized $1,500 worth of product after a police officer responding to a request for an ambulance at Molitor’s home noticed a smell of purported marijuana, which remains illegal in Pennsylvania except for verified medical users.

Molitor, 49, said he has lab tests that prove all the products, which include hemp flower and edible products, have less than 0.3% tetrahydrocannabinol, or THC, which makes them legal. THC is the main psychoactive compound in marijuana. He says police refused to examine the documents.

The case remains under investigation and no charges have been filed. Molitor said the seizure has caused him financial difficulties.

The problem is hemp looks and smells like marijuana. The only definitive way to tell them apart is to test for the THC level. Marijuana has a level of 0.5% or higher.

There are no tests readily available that give immediate results, however, said attorney William Roark of Lansdale, chairman of the Pennsylvania Bar Association’s medical marijuana and hemp law committee. That’s led to some people being wrongly charged.

“The law is evolving … however, there is still a good amount of confusion around this,” Roark said. “Frankly, it’s the science I think that needs to catch up … How is it that we’re going to be able to determine on a relatively quick basis whether or not this product is legal or not?”

Locally, Molitor is one of three people charged in hemp-related cases. He was arrested after a Scranton postal employee thought they smelled marijuana coming from a package containing hemp flower Molitor mailed to a customer. Charges were dropped after subsequent testing showed the THC level was 0.34%. While the level was over the limit, it was within the margin of error for the testing method.

The other case was filed in Wyoming County Court against Hunter Smetana and Colby Kluk, owners of 3Buds LLC, a hemp and CBD dispensary with several locations including Scranton, after a Tunkhannock police officer found purported marijuana — which Smetana and Kluk claim was hemp — during a March 2020 traffic stop. That case is scheduled for trial in September. 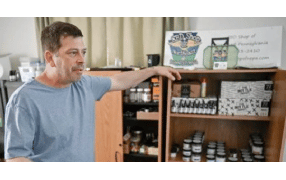