The officer, who has not been identified, is prohibited from using marijuana by police bureau policy as well as by the Municipal Police Officers’ Education and Training Commission, which sets statewide standards for police officers, even though medical marijuana use is legal in Pennsylvania.

“It’s unique territory,” Mr. Peduto said Thursday after an event at Westwood Elementary School. “We have several city employees who are prescribed marijuana for medicinal purposes. It is different, though, with police. Because with police there is a very strict law that prohibits the use of marijuana for any police officer in the state of Pennsylvania.”

If an officer obtained a medical marijuana card or used the substance, “it would be cause for denial of certification or revocation of certification,” Major Troy Lokhaiser, MPOETC executive director, said Friday. Officers can’t work as municipal police officers in the state without certification.

That directive was based largely on federal law, which prohibits possessing a firearm while using marijuana, medical or not, Maj. Lokhaiser said.

Mr. Peduto said Thursday that the city’s attorneys are still considering the best route forward for police officers who have medical marijuana cards, but that state regulations will likely trump city rules.

“We are still working through the legal definition of it, but it appears the state law is the law we have to follow. That has not been determined but it looks that way,” Mr. Peduto said.

Pittsburgh police officers are subject to both random and non-random drug tests, depending on their positions and the circumstances, according to police policy. It was not clear which type of test was used in this case. 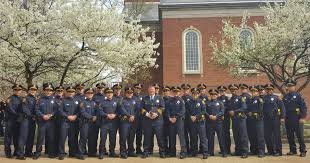