The Free Hemp Citizens’ Initiative, seeking to introduce a law decriminalizing the possession and cultivation of cannabis, has faced a dilemma. In 2020, due to the pandemic situation, there was a problem with collecting signatures. A very difficult decision was made. Following the vote of the cannabis community, it was decided to postpone the initiative to 2021, despite long preparations already made.

Preparations to collect signatures for the citizens’ initiative lasted almost a year. After the involvement of thousands of volunteers, several hundred shops and service points, the pandemic realities thwarted the plans. The introduction of “social distancing” made it difficult to collect signatures and introduced a moral problem. Submitting the signature would endanger health, which would throw a negative light on the entire action. Jakub Gajewski, vice president of free cannabis, with a desire to maintain the grassroots and democratic spirit of the whole action, decided to turn to the community for advice. The elections in the form of an online poll on Facebook showed that the vast majority of cannabis supporters are also in favor of not endangering their health and moving the collection of signatures to 2021.

The Free Hemp Citizen Initiative aims to collect 100,000 signatures to submit the bill to the Sejm.  The purpose of the act is to decriminalize the possession of 30 g of dried herbs, the cultivation of 4 cannabis bushes and the possession of 200 grams of cannabis in the place of residence. This would make every citizen have the opportunity to benefit from the medical and recreational properties of these plants in the era of civilization diseases. Already 15 deputies have the opportunity to present such a bill. If it was only about sending the bill for work in the Sejm, the simpler way would be to submit the bill by a deputy. However, in order to provoke a public debate and to maintain the form of a completely grassroots movement, a more social form was chosen.It will also gain even more publicity for the cause, as many citizens are still unaware of the problem, while preserving the image of cannabis that has been demonized by the media for many decades. Today we have the comfort of using some of its health properties in the form of cannabidiol and cannabigerol, which has also been achieved through years of efforts by cannabis enthusiasts. Products containing these substances in the form of dried oils, extracts or hashish, tested and tested, are available at BioHemp.pl . The Free Hemp Association has been fighting for the freedom of cannabis for 15 years by organizing signature collections, conducting talks with politicians and raising public awareness about these wonderful plants.

In an online poll, over 85% of the over five thousand votes of cannabis enthusiasts were in favor of postponing the campaign for another year. Even among strong supporters of full legalization of marijuana, the prevailing opinion is that raising this topic in a pandemic situation would be a shot in the foot.

“We do not want to take half measures (much less effective” Internet petitions “) or postpone the campaign to the autumn and winter months (collecting signatures in the rain and in the cold is not conducive to the matter), so the decision is unambiguous and final: 2021.” – Jakub Gajewski, vice president of free cannabis.

Currently, Free Hemp is collecting everyone willing to support the initiative. If you have the opportunity and want to support a great initiative, visit: wolnekonopie.org . 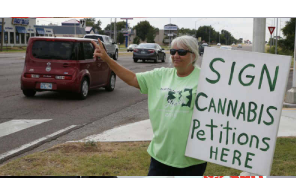