Here’s teh introduction to their piece…

Recreational cannabis may be legal in California, but debate rages on over how visible the once-taboo plant should be in daily life — namely, along the state’s roadways.

A fight is brewing in the state Legislature over cannabis-related billboards that have sprung up around the state, advertising tools the industry says are necessary to support the struggling legal market but that opponents argue expose children to a potentially harmful substance.

A pair of competing bills introduced by Assembly Democrats take vastly different approaches to where licensed marijuana operations can market their businesses and products in public, with one proposing a ban on any cannabis-related billboard that can be seen from a highway.

“This is a very new industry and I don’t think that we should let the advertising get out of hand,” said Assemblymember Jacqui Irwin (D-Thousand Oaks), the author of the more restrictive CA AB 273 (21R).

Assemblymember Bill Quirk (D-Hayward) is taking a more industry-friendly approach with his proposal, which would prohibit cannabis advertising within 15-miles of a border along highways that exit the state. CA AB 1302 (21R) would permit billboards along most thoroughfares while discouraging interstate sales, which are still federally illegal. 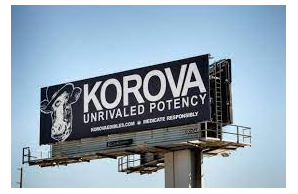