Marijuna Moment has the story

A federal judge gave a campaign to legalize medical marijuana in Nebraska a second wind on Monday, siding with the activists in a lawsuit over the state’s signature gathering requirements for ballot measures.

BIG NEWS: Thanks to our lawsuit, a judge just blocked an unconstitutional roadblock in our state’s ballot qualification process. https://t.co/QABBowBvWF pic.twitter.com/9dlm2wJVsv

With about three weeks left before the July 7 deadline to turn in enough valid petitions to qualify a pair of reform measures for the ballot, U.S. District Judge Joh Gerrard issued a preliminary injunction against the state, barring officials from enforcing a requirement that activists collect signatures from a minimum of five percent of voters in at least 38 counties across the state. 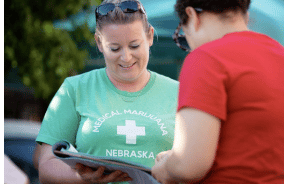