You can always rely on UK rag the Sun to give you all the gory details you never needed to know !

THE horned Q-Anon “shaman”, who was seen storming into the Capitol, says he first got high age 11, likes to take psychedelic cactus and used to go to school dressed like Brad Pitt, The Sun can reveal.

And in exclusive pictures, shared by a former teacher at his high school, pro-Trump rioter Angeli, can be seen dressed as the Hollywood actor’s character in the movie Interview With A Vampire, pretending to have a pregnant belly and posing with school friends as a member of the debate team.

x-teacher Eara Betts Goncalves told The Sun how the QAnon supporter – then known as Jacob Chansley – was a “sweet boy” who enjoyed being on the school speech and debate team and “marched to the beat of his own drum”.

Eara, who taught him at Moon Valley High School in Phoenix, Arizona, said she was initially shocked when she heard her former student had invaded the Capitol but became less surprised when she saw the pictures of him – wearing horns, face paint, a fur head-dress and screaming in the Senate.

In an exclusive interview, Eara told The Sun: “I was shocked when I heard it was him. I hadn’t really looked at pictures of him in the Capitol building.

“However, after I saw the pictures and posture of Jake, I wasn’t at all surprised.

The tattooed 32-year-old also admitted to having several profound experience after taking “psychoactive” and “ceremonial” plants such as cactus and mushrooms as part of his “spiritual journey” towards becoming a “shaman” on the “Jake Angeli – Keys for our Ascension” podcast.

“I think I was 11 the first time I got high, and it was because God love him, my dad gave it to me,” he said on the podcast.

“But the thing is the Lord was watching out for me and gave me such a profound spiritual experience that I was able to see my thoughts … there was this burning questions in the back of my head of, ‘What is life all about?”

He revealed that after a stint in the US Navy he “dove head first” into experimenting with psychoactive substances. 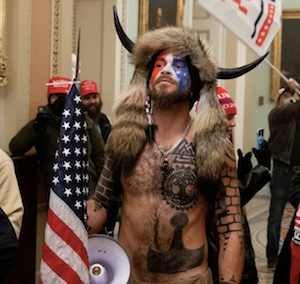