Here’s the introduction to this short but interesting piece

Do psychedelics introduce an illusion of being part of nature or do they help us to see the truth of our situation more clearly? A scientific understanding of what we are suggests the latter. To begin with, on a physical level, we’re made of exactly the same elements as the rest of the natural world. When we die this material continues to flow around the ecosystem, becoming parts of other organisms. This exchange is going on even as we live, breathing the oxygen created by plants and putting our own waste products into an ecosystem that will repurpose them for something else.

On the biological level, we are an evolved organism like all others, there is no biological dividing line between us and the rest of nature. We share a common ancestor with all living things, including plants. What’s more, we’re not really a single organism. We contain bacteria that we need to survive, and they are organisms from an entirely different kingdom to the rest of our cells. We’re woven together out of many aspects of the natural world, we can’t help but be fully part of it.

Further evidence that ecological consciousness reflects relating more clearly than ego-consciousness comes from the scientific idea that the ego is not something solid and real but is instead a psychological construct. Combined with the evidence that psychedelics act to remove this construct, we’re left with a picture in which our usual story of separation from the natural world is the delusion, not the perspective of our being part of nature. 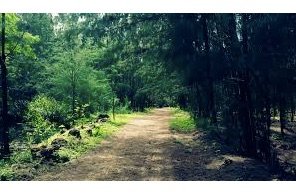