A new study shows that daily cannabis consumption may have little effect on the ability of patients behind the wheel.

The study, published in the April edition of Journal of Concurrent Disorders, was authored by a team of researchers from three collaborating groups: the University of Toronto, Health Canada, and the Centre for Addiction and Mental Health. A total of 14 patients took part in the study, which sought to find out how daily medical cannabis consumption would affect patients’ ability in a simulated driving experience.

Subjects of the study, each of whom had a doctor’s authorization prior to agreeing to participate, reported their daily use of cannabis and completed self-report questionnaires, profiles of mood states, and a series of questions about addiction, while also providing blood samples to determine THC levels.

Of the 14 participants, 11 were male. Half said they used cannabis more than five times per day, using an average of 1.1 grams per session. Subjects were asked to abstain from cannabis in the 48-hour period prior to each driving simulation, and then to complete it twice: once prior to, and then 30 minutes after consuming their daily dose. Each patient used their preferred cannabis variety, with the majority of participants using strains with THC in the 15 to 20 per cent range.

Despite abstaining from cannabis for 48 hours prior to the simulation, the average participant had an average level of 3.99 nanograms of THC per millilitre of blood, well over the legal limit for impaired driving. 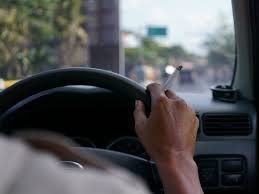