ROTTERDAM, NETHERLANDS – The millions of containers unloaded by Rotterdam’s giant cranes make it Europe’s largest port, but the Dutch city is also dealing with ever larger amounts of a less welcome cargo: cocaine.

A record of nearly 70 tonnes of the drug was intercepted in 2021, up 74% from a year before, said Ger Scheringa, who leads a team of armed customs officers at the port.

Rotterdam and Antwerp in neighbouring Belgium were the two main entry points used by a Dubai-based “super cartel” supplying a third of Europe’s cocaine, which Europol said it busted last month.

The cocaine is usually hidden in containers, or sometimes underneath ships in openings below the water line where they are then recovered by divers.

Pinpointing the reason for this jump in cocaine seizures is a “delicate question”, Scheringa told AFP.

“It seems there are lots of buyers” in Europe, he said dryly.

“And if there is demand, it is supplied.”

Rotterdam has taken major steps to stop the white powder making its way into Europe, particularly by stepping up customs checks, the Dutchman said.

But he doesn’t expect Rotterdam’s record for seizures to be beaten in 2022, and admitted that he “doesn’t know if there is really a solution to the problem” as long as people keep taking cocaine.

NEEDLE IN A HAYSTACK
Rotterdam mayor Ahmed Aboutaleb has deplored the fact that the port city is “drowning in cocaine”, and condemns the violence that accompanies the drug trade.

But customs official Scheringa said the “biggest challenge is to find a good balance between the speed of logistics for the port, and checking everything you want.” 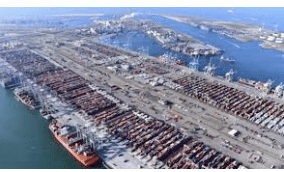