San Diego To Crack Down On Cannabis Billboard Advertising

San Diego officials say they plan to crack down on marijuana advertising, particularly the billboard ads that have become increasingly common with recreational use of the drug now legal in California.

The proposal, which would go beyond relatively new state laws that govern marijuana advertising, will be included in a series of city code updates that Mayor Kevin Faulconer’s staff plans to present to the City Council next year.

State law already prohibits the billboard ads within 1,000 feet of some sensitive uses, but the state list doesn’t include parks, churches or residential care facilities.

In addition, Cate’s proposal prohibits marijuana billboard ads within 100 foot of residential housing, a restriction not included in state law.

Cate’s proposal also expressly says the restrictions would apply to both legal and illegal marijuana businesses, unlike state law which has been criticized for leaving open the question of whether it applies to illegal businesses.

Finally, Cate wants to prohibit illegal marijuana businesses from any kind of advertising on billboards, internet platforms, newspapers, magazines and other publications.

While San Diego officials have managed to shut down nearly all of the illegal dispensaries in the city, an estimated 100 illegal delivery services have taken their place as a new black market for marijuana.

Cate’s proposal says violations of the new regulations would be prosecuted as infractions for a first offense and as misdemeanors for subsequent offenses.

Cate says his proposal is a crucial step for the city in the wake of recreational marijuana sales becoming legal on Jan. 1, which has prompted more aggressive advertising campaigns.

“I believe my proposals are fair and reasonable regulations that will provide our code enforcement division and our Police Department with additional tools to better regulate marijuana advertisements within our city and protect our children and families,” Cate said in a news release.

The city’s legal marijuana businesses are welcoming the new restrictions.

“These are common-sense reforms that make the city’s advertising restrictions consistent with the state’s regulations, so we have no objection to Cate’s proposal,” said Phil Rath, executive director of the United Medical Marijuana Coalition.

“We also see the restrictions as another avenue for the city to identify unlicensed operators and bring them into compliance with the regulations our members abide by,” said Rath, whose organization includes the city’s legal dispensaries.

But critics of marijuana legalization and the city’s policies on the drug say the proposal wouldn’t go far enough.

Those critics would like to see content restrictions on marijuana ads, and they contend that limiting the locations of billboard ads won’t prevent young people from seeing them.

They note that San Diego prohibits dispensaries from including on their storefront signs any pictures of marijuana leaves and other images that could attract the eyes of young people.

“The billboards now have all the images that the City Council said shouldn’t be part of the process,” said Scott Chipman, leader of San Diegans for Safe Neighborhoods. “It’s mission creep. It’s the normalization of drug dealing in our society.”

Chipman said allowing any marijuana billboard ads is a terrible idea, suggesting the city should post ads warning teens about the dangers of marijuana use.

“It sends a bad message to our teens,” he said. “Every teen drives by some billboard in the course of a week. Where are the messages telling them not to use marijuana?”

A spokesman for Faulconer said his staff plans to present essentially what Cate has proposed to the council for approval.

“The proposal is currently under review but we don’t anticipate any substantial changes,” said the spokeswoman, Christina Chadwick, in an email. 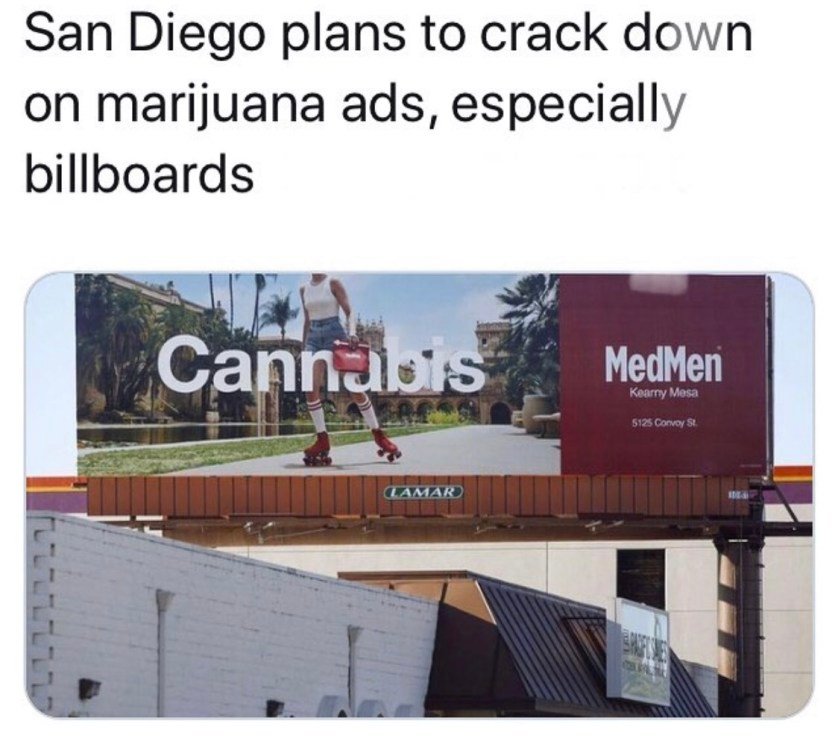