In an interview with The Ringer that was released on Tuesday, the senator reiterated that he and his colleagues will be “introducing our bill shortly” to end cannabis prohibition—and he said banking reform legislation that’s been filed will have to wait because “we’re not going to bargain against ourselves.”

Schumer made a similar point in an interview with Marijuana Moment last month, arguing that passing a measure that protects banks that service state-legal cannabis businesses first could jeopardize the chances of advancing comprehensive reform. The thinking is that Republicans and moderate Democrats who are on the fence about a bolder policy change might be less inclined to vote for it if they have an opportunity to pass a more modest bill like the Secure and Fair Enforcement (SAFE) Banking Act instead.

The House has already approved the marijuana banking bill this session along largely bipartisan lines. 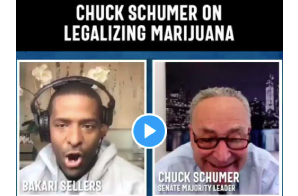