Schumer has been busy on the cannabis front this week.

Senate Majority Leader Chuck Schumer (D-NY) says lawmakers are in the process of merging various marijuana bills, including his own legalization legislation, as the chamber works to enact reform this session.

In an interview on Wednesday night with former NBA player Al Harrington, who owns the cannabis company Viola Brands, Schumer talked about his support for ending federal cannabis prohibition, what he hopes reform to accomplish and the political state of play for marijuana in the early days of the 117th Congress.

Notably, he said “our bill—the bill that I put in—now we’re putting it together with some other bills.”

Here’s what he told Harrington 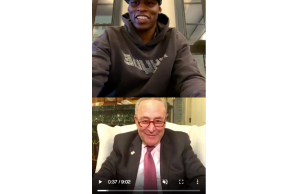