San Francisco police arrested a business owner for allegedly selling meth from what local people believed to be a magic mushroom shop.

Officers raided the shop on Haight Street in November, filing criminal charges against the owner for selling methamphetamine.

Bobbi’s on Haight, a shop that launched in October, was open for a little over a month before police raided the business on Nov. 23, arresting its owner; 38-year-old Kevin Tevis, for allegedly possessing methamphetamine with intent to sell from the business.

The building was registered to sell retail merchandise, according to city records.

The shop reportedly sold clothes and branded merchandise, but also allegedly sold psychedelic magic mushrooms. Two separate sources confirmed to The Standard they had knowledge of magic mushrooms being sold at the store during the time it was open.

Adam Egelman, who lives across the street from the former business, said he initially thought the shop was raided for selling psychedelics and was disturbed by the “show of force” from SFPD.

Damn the storefront on Haight & Cole that sells 🍄 was just raided by sfpd. There are dozens of militarized cops here getting overtime & blocking the bus. Fuck your war on drugs @BrookeJenkinsSF pic.twitter.com/MZ6sa1d5OA

But when The Standard informed him that the charges included selling meth, Egelman said that “changed the narrative somewhat.”

“I still don’t think the police response was warranted,” Egelman said. “It was the day before Thanksgiving at 5 p.m. It didn’t seem there was actual danger.” 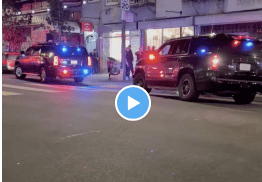