SINGAPORE – A Nanyang Polytechnic (NYP) student met a schoolmate on campus in June last year to pass her a piece of lysergide or LSD as she was curious about the hallucinogenic drug.

Ally Tan Ya Teng, 18, gave a token sum of $1 to Saahil Mahesh Thadani for the drug.

In a separate incident at NYP, Saahil sold LSD to another schoolmate, Tahsh D Khemlani, 19, for $40.

Saahil also gave the drug to a third schoolmate who was 17 years old at the time and cannot be named as teenagers under 18 are covered under the Children and Young Persons Act. All four students are Singaporeans.

As a young offender, Saahil was sentenced on Tuesday (Nov 17) to at least a year’s reformative training.

This means he will be detained at a centre and made to follow a strict regimen that includes foot drills as well as counselling.

Saahil, now 20, had earlier pleaded guilty to one count each of trafficking LSD and being in possession of the drug.

The outcome of the cases involving the three other students were not revealed in court documents.

The Central Narcotics Bureau stated on its website that LSD is a hallucinogen “often sold on blotting paper which is usually imprinted with a colourful cartoon or design”.

Saahil bought LSD from an online platform on at least two occasions.

The court heard that he bought 200 tabs of the drug for $500 and used bitcoin to pay for them. He received the shipments in April and May last year.

Saahil had intended to traffic the drug to anyone who wished to buy or try them.

He had also planned to sell half the supply to earn extra pocket money and keep the remainder for his personal consumption.

He passed Tan the drug while they were at school some time between 4pm and 5pm on June 22 last year.

Court documents did not reveal how his offences came to light but NYP found out about the incident involving Tan.

Its student development office interviewed Saahil at around 7pm on June 24 last year. Police arrested Tan and Saahil about an hour later.

For trafficking LSD, an offender can be jailed for up to 20 years and receive up to 15 strokes of the cane.

Responding to queries from The Straits Times, NYP said that Saahil is still  a student.

An NYP spokesman added: “The polytechnic expects our students to obey the law at all times, and takes a strong stance against such offences which put the safety of our community at risk. Following the incident, NYP reported the matter to the police.

“With the conclusion of the court proceedings, we will now convene disciplinary proceedings to mete out appropriate sanctions.” 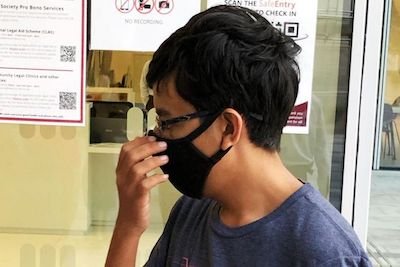