In 2022, a smiling Jean-Claude Pautot walked along the red carpet at the Cannes Film Festival. He had played a supporting role as a thief in Louis Garrel’s movie The Innocent and, at the age of 66, the media were praising him as a great example of social reintegration after prison. An habitual offender and bank robber, he had served 25 years behind bars and managed to escape on various occasions. After serving his time he dedicated himself to painting, with modest success. He also wrote, penning a comic book based on his life experiences. What nobody knew until now is that Pautot also served as a middleman between French and Spanish drug traffickers bringing cocaine into Europe from the Caribbean. He was arrested on December 27 in Marbella in southern Spain as part of a joint operation between Spanish and French police that also netted several members of the Marseille mafia.

The arrival of a sailing boat in Puerto de Santa María, in the Spanish province of Cádiz, in the summer of 2021 set alarm bells ringing with the local Civil Guard. The vessel’s captain was a French citizen who was believed to be linked to drug trafficking. In fact, in 2018 this individual had been rescued in the English Channel after the boat he was captaining – allegedly loaded with cocaine – sank. After his arrival in Cádiz he made contact with a compatriot who was being tracked by the Spanish National Police due to his ties to international drug trafficking. The captain had no police record but his surname comes from a family closely linked to cocaine dealing in Paris. Both men held frequent meetings with French citizens living in Marbella, some of whom were identified as “historical members of the Marseille mafia,” according to sources close to the investigation. Conversations with Pautot also took place.

The network was involved in smuggling cocaine into Spain for distribution in the southern coastal towns of Málaga and Cádiz, as well as Paris and its metropolitan area. The organization ran on a clearly defined structure. On the one side, the Spanish element, based in Marbella and tasked with contacting suppliers in Colombia and Venezuela. On the other, the French branch, which was in charge of distribution. The role of the former bank robber, Pautot, was to facilitate contact between the two gangs. “He was not the ringleader, but he did play a relevant role,” say the same sources.

Police surveillance revealed that in the autumn of 2022, the organization had set up what appeared to be a new drug transportation operation. One of the gang members traveled to Spain to meet with Venezuelan associates and also to Paris where, along with his brother, he took different packages in and out of an apparently empty apartment. Meanwhile, the captain of the boat that had docked in Cádiz a year earlier sailed to Martinique, a French island in the Caribbean off the northern coast of Venezuela, where he purchased, repaired and refitted another boat. In November, he set sail for Europe, making a quick stop on Margarita Island, also off the coast of Venezuela. He then set course for Europe, via the Azores. 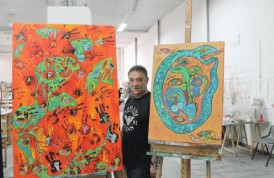