The Coast Guard Cutter Richard Dixon’s crew transferred approximately 250 kilograms of seized cocaine and the custody of three apprehended smugglers to authorities in the Dominican Republic on Monday, following the interdiction of a go-fast vessel in the Mona Passage.

According to the Coast Guard, two of the three men apprehended are reportedly Dominican Republic nationals, while one other claimed Haitian nationality.

The seized cocaine consisted of six bales with 112 packages inside.

The Coast Guard estimated the wholesale value of the seizure at $3.75 million. 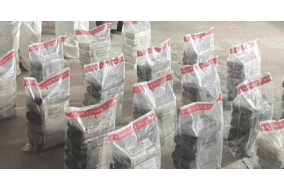