Cannabis firms eying the lucrative German market since the first shoots of liberalisation in 1994 have become accustomed to delays.

A quarter of a century on, just when things appeared to be turning a corner, a game of legislative ping-pong has broken out and sent the tendering process for domestic growers rattling around the courts.

Although the country is doing all it can to hand the initiative to German firms, legal experts say the inability to nail down a licensing regime that is fair on both overseas importers and domestic harvesters plays directly into the hands of well-funded outside players currently biding their time. With a population of 83 million, Germany is by far the largest European jurisdiction.

“Everyone wants to enter the German market,” said Kai-Friedrich Niermann, Rechtsanwalt lawyer. “But it’s tough for companies to do so because you cannot advertise for medical cannabis, as that is prohibited. To put on a round-table is a big thing, you may just want to do some simple promotion, but it is very difficult and will take a long time [for the market to open]. I think longer than four or five years.”

Following 1994’s partial decriminalisation by the Supreme Court for small amounts, nothing really happened in Germany until moves by the US to legalise eventually stoked interest again, yet it still took until 2016 for the country to get its act together.

Germany began the move toward legalisation of medicinal marijuana in 2016, when it allowed doctors to prescribe the drug to patients displaying certain symptoms, who could then have their costs reimbursed by the state.

A tender process for domestic growers was drawn up by the regulator, the Federal Institute for Drugs and Medical Devices (BfArM), but with one fatal flaw; to qualify for the first step, applicants in Germany had meet a number of qualifications, one of which was experience of growing cannabis.

As no-one was allowed to grow marijuana in Germany prior to the law change, no firms could progress to the next stage of the tender process.

BfArM went back to the drawing board following a legal challenge and redrafted the rules to say local firms could acquire a reference from outside growers, who would then transfer their experience to a German applicant.

The second step is what legal experts told Cannabis Law Report contains the true detail of we are likely to see when the whole thing finally goes public.

A limited number of applicants made it through to this step but ran out of time due to the complexities they faced. Their only option was to sue BfArM, and one applicant was backed by a Dusseldorf court in March 2018, who said the regulator had made a mistake in not extending the timeline.

And so, BfArM decided to halt the tender process entirely and start it from scratch.

While this was happening, the import of cannabis and sale of cannabis to German patients from outside firms was still possible, from licensees taking advantage of pre-existing rules.

It was not a straightforward, or cheap, process, lawyers said, and the bulk of the importation was done by Canada and the Netherlands, which are currently the only countries recognized legally by Germany as having the necessary approvals to import.

This may change soon, as BfArM is speaking to other countries attempting to gain the rights, but Netherlands and Canada remain in pole position.

“Right now those who have the knowledge of how to grow have the advantage in the process,” said Peter Homberg, head of the life science practice at Dentons law firm in Berlin. “I believe there is nothing wrong with this, as you must fulfil tough quality requirements, and this is not usually done by the farmer around the corner. As such it is a quality issue, which is very important for the BfArM and which they are very closely monitoring.”

In March 2018, the second round of the tendering process was initiated, and became a single step instead of two, to ascertain who can grow marijuana in Germany.

This did not stop the legal tennis match however, and it has since gone back to court, although this time BfArM escaped without too much censure. The new deadline for respective documents for applicants hoping to gain approval is December 11, however legal experts are not confident this will stick, and are expecting the regulator to fudge everything, and not grant any licenses until at least April 2019.

It is believed what eventually shakes out should give German firms more of an equal footing.

“In the second tender we have seen a little bit more relaxing in relation to the requirement of knowledge to grow cannabis, in such way the referenced company doesn’t have to have had knowledge of cannabis but knowledge of growing herbs for medicinal purposes,” said Homberg. “This broadens the basis for possible applicants.”

Some facts about what will be won via have emerged in the meantime; although the total amount of cannabis to be grown over four years is relatively low, at 10.4 tonnes. There are 13 lots of 200kg, which will be granted to licensees, whereby only five lots will be allocated to all firms.

“We will definitely see at least three different companies growing cannabis in Germany in future,” said Homberg. “It is becoming very competitive and interesting, however there are lots of grey areas which have not been touched by the liberalisation of the legal environment.”

Niermann added that he feels there is much more to do in Germany before the industry matures and realises its true potential.

CBD is huge, however, and “everyone wants to do something with it”, he said.

There is a European framework for CBD oil, and there are legal options besides the licensing as a regular medicine. “But they both cost money, and you have to be prepared to spend to get a licensed CBD product which allows you to make health claims.”

Once again the quirks of German laws around advertising have stymied progress. As Niermann points out: “What’s the sense in developing products and brands and you can’t tell the consumer what the product is good for?” 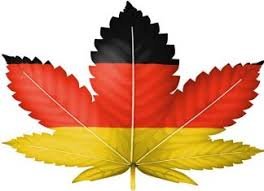