To be honest if this is fake news we don’t even care. The construct is so fantastic we’ll report it as our weekend story.

Swedish man had a lucky escape when a gull nabbed his bag of weed just as detectives were approaching a nearby suspect smoking marijuana.

The plain-clothes officers were patrolling the Gothenburg Cultural Festival when they spotted a woman openly smoking a cannabis joint.

Sweden is home to some of the world’s strictest drug laws, with possession of marijuana punishable by a hefty fine and six months in prison.

But, as the undercover policemen closed in, a man on a nearby park bench clocked the officers who then spotted him tossing a bag of weed away.

Diverting their attention from the smoker, the law enforcers headed to arrest the man but, just as the second officer was reaching down to retrieve the suspicious bag, a gull swooped in and made off with the evidence.

A spokesman for Gothenburg police explained the two officers involved were highly experienced and estimated the bag contained about 10g of cannabis.

However, no evidence – no arrest, and ‘The Beak’ were foiled by… a beak.

The police spokesman also confirmed the man fled as they were watching the fugitive bird making off with the weed.

“What the policemen did not expect was that a third party would interfere,” explained Stefan Gustafsson.

“There were also a large number of seagulls at the site, one of them saw his chance and picked up the bag and lifted quickly with the ‘booty’.

“As quickly as the seagull disappeared, so did the man who threw the bag away.

“The policemen stood and watched the evidence disappear into the sky.”

The officers did, however, arrest the woman for use and possession – an act the Polisen described as “a patch over the wound”. 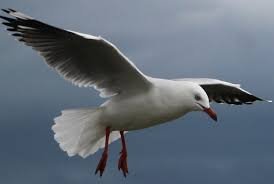