By Daily News Reporter in Dodoma

DEBATE of whether Tanzania should engage in the production and sale of bhang on Monday resurfaced in Parliament as some legislators pushed the government for the business.

Mr Jumanne Kishimba (Kahama-CCM) started the debate when contributing to a report tabled by the Agriculture, Livestock and Water Committee.

In his contribution, the legislator argued that bhang was currently a lucrative business worldwide calling on the government to legalize it.

“Our neighbouring countries such as Malawi, Zambia and Uganda have embarked on the commercialisation of bhang cultivation. Bhang is now used in pharmaceutical industries and other productive sectors, why we’re not utilising this opportunity to boost our economy considering the fact that Tanzania is among the leading bhang producers in the world?” he queried.

Mr Kishimba built further his argument, noting that bhang was fetching the highest price in the world market, insisting that Tanzania should utilise the price advantage.

According to the legislator, even the current law (the Narcotic Drug Control Act) gives allowance for the government to legalise some plants such as bhang and opium.

It was at this juncture when Minister of State in the Prime Minister’s Office (Investment) Angellah Kairuki intervened.

“Honourable Speaker, my office has received applications from investors who have shown interest in bhang processing. So, I ask the legislator to be patient while the government is working on the matter,” she said.

Then, Geita Rural MP Joseph Musukuma renowned for advocating it, rose, calling on the government to formulate regulations to allow bhang commercialisation.

As debate got heated, Speaker Ndugai allowed Mr Kishimba to continue with his argument.

“Honourable Speaker I, therefore, ask the government to provide a six-month pardon for any person with bhang stock to come forward and sell it to the government before the world price drops. This can be an official sale by which the government issues receipts to sellers. The government will get revenue and growers/sellers too,” he concluded amidst cheers.

The Speaker too failed to contain his feelings, saying the matter was so serious in the interest of the nation.

“I was recently in Canada. Bhang is a very big business… it can be one of the leading cash crops if well-controlled, monitored and moderated,” he noted.

However, his request was rejected by Minister of State in the Prime Office (Parliamentary Affairs, Policy, Employment, Labour, Youth and Disabled) Jenista Mhagama, who stated that the government had not allowed bhang production. 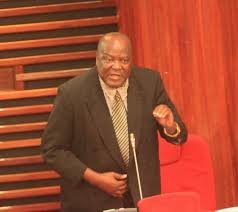