Marijuana Moment has the story

When the local government declines to intervene, two people who explicitly identify as MedMen representatives show up at Stan’s farm.

“We represent a billion dollar marijuana company. You seem to be fighting the same fight we are,” one representative says. “We just want to help you. Ever heard of MedMen?”

“We have a common problem: home grown weed,” he says, as the trio shares a joint.

“We’re just worried about safety, you know? Babies drowning in irrigation and such,” the other person adds.

Stan agrees that babies drowning is no good and anticipates the deal the company wants to offer.

“So you guys want to put all our money together and we go fuck this town up so nobody can ever grow their own weed again? I’m totally in,” he says.

Watch the episode .. you’ll have to be ins the states to watch it though 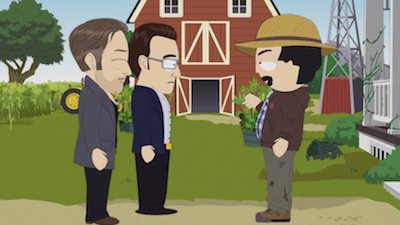