Thailand’s Public Health Minister, Anutin Charnvirakul, said Saturday he believes the smoking of cannabis by young boys in Pattaya was stage-managed to discredit the Bhumjaithai Party and its policy to decriminalise cannabis and hemp.

Responding to an image, widely shared on social media, of a few young boys smoking weed from a bamboo pipe at the Pattaya fish market on Friday, Anutin said he questions how a 9-year-old boy could afford to buy the pipe and the weed, believing that the scene was stage-managed.

A 10-year-old boy was returned to a child care centre in Chon Buri Province yesterday by Pattaya police and a social worker. The boy lived at the centre, after he was sent there by his grandmother to learn some discipline, but he escaped and joined other street children in Pattaya.

Anutin pointed out that the problem of homeless children is not limited to weed smoking, but also the abuse of other addictive substances, such as inhalants and liquor, adding that these problems are the responsibility of the Ministry of Social Development and Human Security.

He suggested that the Democrat MP for Rayong Province, who said Anutin should be held accountable, should consult the Minister of Social Development and Human Security, Juti Krairiksh, who is a Democrat.

He said that, if the Democrat Party wants all the problems related to cannabis to be resolved, they should support the cannabis bill, which is about to have its second and final readings in the house.

Anutin, leader of the Bhumjaithai Party, also accused the Democrat Party of flip-flopping on the cannabis bill. 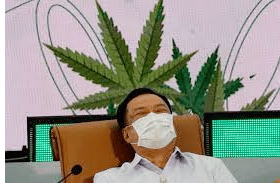