The Buds of Wrath? – Article: COVID is pushing thousands of Chinese immigrant workers into the marijuana business—sometimes leading to exploitation and labor trafficking

MONTEREY PARK, Calif. — Irving Lin, a jovial entrepreneur in his late 60’s, wanted to share a once-in-a-lifetime opportunity, a near-miraculous way out of the economic devastation wrought on Southern California’s Chinese communities by the pandemic: the gift of marijuana.

“We are making a fortune in Oklahoma, and you can too,” Lin, speaking in Mandarin, told a crowd of 30 potential investors gathered for a PowerPoint presentation at a Chinese cultural center on Dec. 5. The return on investment is as high as 1,200 percent, Lin explained eagerly. Finance one greenhouse, and you’ll walk away with $300,000. Three greenhouses will make you a millionaire.

“The demand is huge and growing, and so are the profits,” he assured his audience, almost all of them Chinese immigrants. “All you have to do is hand over the money, and our team will take care of the rest.”

Only a month earlier, Lin’s previous venture had come to a screeching halt when federal agents raided a string of black-market cannabis greenhouses built across 400 acres of the Navajo Nation in New Mexico. That raid, dubbed “Operation Navajo Gold,” was among the largest in the country, according to the U.S. Drug Enforcement Agency, netting over 60,000 pounds of illegal marijuana. A federal investigation of the farms is also looking into allegations of human trafficking and worker exploitation.

The new farms were operating with state-issued medical cannabis cultivation permits. Oklahoma’s cheap land, lax enforcement and miniscule percent tax rate ensured that they would be allowed to proceed in peace. Even if the farms were to get shut down in the future, he said, investors could be confident of turning a handsome profit in the short term.

“Oklahoma, it’s like a heaven there,” said Bryan Peng, a Los Angeles-based marijuana farm manager whose grow site in New Mexico was shut down by the federal raid in November.

“The sky is the limit. We can take it to the next level.”

A Searchlight New Mexico investigation found that in the weeks since law enforcement shuttered the 36 Navajo farms, hundreds of the workers and managers have relocated to Oklahoma, where they plan to build an even more formidable network of grow sites.

To provide the labor, the managers are tapping into a huge pool of immigrant restaurant workers who lost their jobs due to COVID-related closures and business restrictions. Many of the workers are being recruited through Chinese labor brokers or “job agencies,” based primarily out of Southern California’s San Gabriel Valley—part of what prosecutors and human rights attorneys describe as an informal, cash-based economy that enables exploitation and abuse.

Read the full article at  https://nmpoliticalreport.com/2020/12/23/covid-is-pushing-thousands-of-chinese-immigrant-workers-into-the-marijuana-business-sometimes-leading-to-exploitation-and-labor-trafficking/ 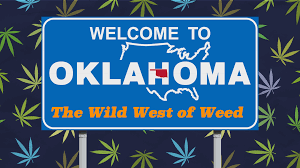