The Canna Banger Is Here !

The Times writes……A butcher from southern France is enjoying unexpected commercial success after creating what he believes to be the world’s first cannabis-infused sausage.

Luca Morand, 22, from Marseilles, said he sold 30kg within three days of putting them in his shop this month. “I’d never sold so many sausages so quickly,” he added.

Mr Morand’s bangers contain cannabidiol (CBD), a cannabis extract that can be sold and consumed legally in France and the UK and which does not have psychotropic effects — unlike tetrahydrocannabinol (THC), another constituent of cannabis plants. “CBD gives the flavour and you can consume it entirely legally,” Mr Morand said. “This is a relaxing product.”

The butcher has called his sausage the oiudy — pronounced weedy. He said: “I have got a varied…

Read on at  The Times 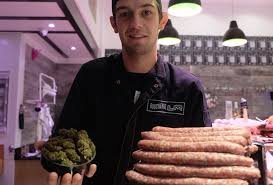